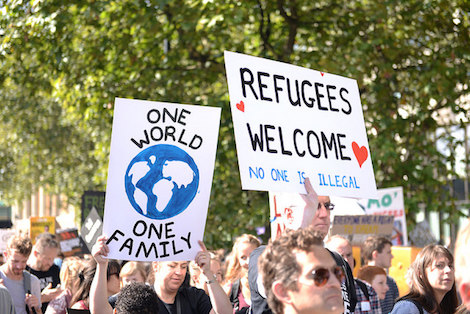 We’re now up to 24 governors who have protested or announced a position of non-compliance or defiance towards federal efforts to resettle Syrian refugees in their states. 23 of these are Republicans; the one Democrat, NH’s Maggie Hassan, is in a tough Senate race against Kelly Ayotte. As explained by News Cult‘s Christopher Capwell, these gestures have no legal effect, but could represent a practical obstacle to refugee resettlement:

American University law professor Stephen I. Vladeck put it this way: “Legally, states have no authority to do anything because the question of who should be allowed in this country is one that the Constitution commits to the federal government.” But Vladeck noted that without the state’s participation, the federal government would have a much more arduous task.

“So a state can’t say it is legally objecting, but it can refuse to cooperate, which makes thing much more difficult.”

Kevin Appleby, director of migration policy at the U.S. Conference of Catholic Bishops, said one tactic states could use would be to cut their own funding in areas such as resettling refugees. The conference is the largest refugee resettlement organization in the country.

But “when push comes to shove, the federal government has both the plenary power and the power of the 1980 Refugee Act to place refugees anywhere in the country,” Appleby said.

Boy, that sounds like a recipe for conservative anti-Obama demagoguery, doesn’t it? Though it would be nice to have the bishops on the administration’s side for a change.

In one state, Louisiana, the demagoguery of the current governor, Bobby Jindal, has set the stage for a desperation effort by his would-be Republican successor, David Vitter, who is badly trailing Democrat Jon Bel Edwards in the polls with a runoff pending this Saturday. In the final candidate debate last night, Vitter claimed Edwards was lying about his support for Jindal’s action, and in fact, was also lying about everything wherein he differed from Barack Obama. The Times-Pic‘s Kevin Litten has more:

Vitter, who is trailing in the polls and is closing the campaign with the argument that he’s the only true conservative, tried to paint the anti-abortion Edwards as an undercover abortion rights proponent. And he sought to tie Edwards to President Barack Obama — a frequent tactic he’s deployed throughout the runoff — in his position on Syrian refugees.

“I have a consistent record of standing up to President Obama fighting for border security, fighting for national security,” Vitter said during the debate, which was hosted by WVLA-TV at the Dunham School in Baton Rouge. “My opponent has staked out a very different position … last night he said he would fully cooperate with President Obama including in relocating Syrian refugees. Now today he’s trying to change his tune.”

Edwards accused Vitter of distorting his comments after the terrorist attacks Friday in Paris. Edwards said that he supported Gov. Bobby Jindal’s request to stop the relocation of Syrian refugees to Louisiana. When Vitter doubled pushed back, the two men clashed, with Vitter pounding the table and Edwards raising his voice and pointing directly at Vitter.

Vitter also, and for the first time, directly apologized to Louisianans for his use of prostitutes, which has been an anvil in his lap in his gubernatorial race. But I’m sure he welcomes a new immigration “crisis.” Here was the nasty and mendacious ad he ran during his 2010 Senate race against Democrat Charlie Melancon:

I’m sure his team is cooking up something similar for the final few days of this campaign.