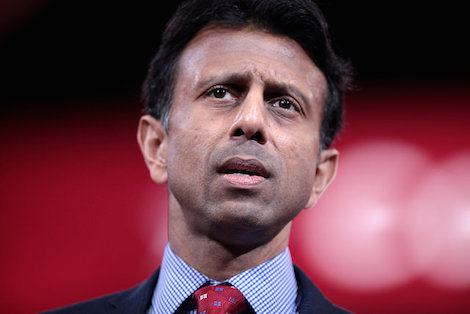 Yesterday, after a long Invisible Primary campaign that pursued almost every strategy imaginable for establishing its candidate as the Truest Conservative in the race, Louisiana Gov. Bobby Jindal, out of money and showing no real momentum, packed it in about ten weeks short of his initial monomaniacal target of the Iowa Caucuses.

It seemed like every time you turned around Jindal was relaunching or rebranding himself. Indeed, it tells you everything you need to know that I was mocking his eternal shape-shifting back in February of 2014, several incarnations ago:

His first big national audition, a universally panned State of the Union response in 2009, was a large whiff, given the drama of that moment, which exposed his signature talk-down-to-the-dummies problem as the smartest guy in the room trying to connect with the Unwashed. His next foray into national politics was to become the most conspicuous 2011-12 surrogate for Rick Perry just before the Texan’s once-formidable candidacy headed straight down the tubes.

Then, after a brief stint on Mitt Romney’s short-list for the vice presidency (before being elbowed out of the way by his rival whiz-kid Paul Ryan), Jindal was among the first Republicans out of the box with a big “rebranding” speech to an RNC audience in January of 2013. It created a slight buzz, but since its thrust was to tout the policy genius of state governments (while implicitly disrespecting all of his congressional rivals), it did not survive Jindal’s subsequent patch of very poor luck back in Baton Rouge, where his big tax proposal (phasing out the income tax in favor of higher sales and business taxes) was shot down by his own Republican-controlled legislature, while the courts sidelined his private-school voucher initiative.

By last autumn, Jindal was running in low single-digits in early 2016 presidential polls, and was pretty much being shoehorned into a small “diversity” box alongside fellow Indian-American Gov. Nikki Haley of SC….

But then Jindal finally caught a break, when the vagaries of the culture wars suddenly made one of his constituents, Duck Dynasty’s Phil Robertson, a national conservative icon of the highest order. Bobby clung to the grizzly homophobe like a life jacket, and now seems inclined to make his latest, and perhaps final pitch to a national conservative audience posing as the maximum defender of “religious liberty” against the politically correct hordes of secular elitism.

But he probably picked the wrong year for this gambit, what with far more authentic and credentialed Christian Right figures like Mike Huckabee, Rick Santorum, Ted Cruz and Ben Carson in the field.

Like other candidates, Jindal suffered through the summer of 2015 being completely thwarted by the Donald Trump phenomenon. So he then chose his penultimate persona as a parasite on the bloated political body of The Donald. In a September speech that could have been entitled, “You Have to Cover This!” Jindal called Trump an “egomaniacal madman,” and kept the barrage up for a good while, with no impact on his target and little benefit to himself. His last gambit, deployed in several “undercard” debate appearances, was to position himself as a sort of Ted Cruz doppelganger, supporting ever-more irresponsible hostage-taking behavior on behalf of culture-war priorities like “defunding” Planned Parenthood. But again, why support a Ted Cruz doppelganger with Ted Cruz in the field, particularly since Cruz is slightly (if only slightly) more adept at hiding his contempt for the “base” audiences that His Exalted Genuis was being forced to demagogue.

Speaking of contempt, the big piece of collateral damage of Jindal 2016 has been the state of Louisiana, which he has alternatively ignored, abandoned and abused. The most telling thing about today’s development is that Jindal pulls out of the presidential race with four days left in the jungle-primary runoff to choose a successor to him, and you’d have to guess what extremely embattled Republican candidate U.S. Sen. David Vitter fears most is “help” from the sitting GOP governor of the state. Here’s how veteran LA political observer Tyler Bridges sums it up:

U.S. Sen. Vitter is making a last-ditch effort to overtake his Democratic opponent, state Rep. John Bel Edwards, before Saturday’s election by tapping into public concerns that Syrian refugees might strike in Louisiana, following Friday’s bombings in Paris that set the public on edge here.

Vitter is airing a TV ad that ties Edwards to President Barack Obama’s decision to allow Syrian refugees to enter the United States and will be hop scotching the state Wednesday and Thursday to hit the issue in different media markets.

But for at least Wednesday night and Thursday morning, Jindal’s announcement becomes the top political story in Louisiana.

“It distracts voters from the issue Vitter wants them to focus on,” said Edward Chervenak, a political science professor at the University of New Orleans. “It’s a desperate time for the Vitter campaign. He needs to reverse the advantage that John Bel Edwards has.”

Every poll released in recent days shows Edwards leading the race, with most surveys putting the advantage at 10 points to 20 points

James Carville, who helped guide Bill Clinton to the White House in 1992, agreed with Chervenak.

“It smothers the news cycle,” said Carville, who has hosted two fundraisers for Edwards. The timing “will help John Bel. When you’re behind, you need to win the news cycle. If you’re Vitter, the last thing you want is to see Bobby Jindal in the news.

It would be richly appropriate for Jindal to deep-six Vitter, deliberately or not. You get the sense that his bags have been packed in Baton Rouge for a good long while. Everything about his resume screams “Cabinet post,” but the question is whether the nasty piece of work he’s proven himself to be in this campaign might disqualify him if Republicans win the White House. He might fit in better on K Street.

UPDATE: In case you just think I have a thing about Jindal (and yes, I sort of do), conservative columnist Matt Lewis had a shorter but no less contemptuous take:

If politicians can be Too Dumb to Fail, then it stands to reason that they can also be too smart to win. Consider the case of Louisiana governor Bobby Jindal, who announced he was dropping his presidential bid yesterday.

On paper, Jindal’s accomplishments and credentials were almost unparalleled. Yet, his campaign floundered. The narrative will be that this was a year of crazy outsiders, and the wonky Rhodes scholar—fond of issuing policy white papers—was simply out of touch with the zeitgeist.

Despite whatever explanation the revisionists spin to explain Jindal’s exodus (and the failure of other governors like Walker and Perry), you can’t blame the rise of Trump or Carson for Jindal’s decision to run away from his strengths as an experienced policy expert. He might have been issuing detailed policy papers, but—on the campaign trail and debate stage—his rhetoric leaned more toward lowbrow pandering than toward elevated conversation

This goes back years. Referring to a particularly vapid 2013 article penned by Jindal, in which he criticized “bedwetting” introspection (“excessive navel gazing leads to paralysis”), Slate’s Dave Weigel observed, “Jindal’s rep[utation] is as a wunderkind who was put in charge of Louisiana’s hospital system at age 28. To be competitive in the Iowa caucuses, he needs to either pretend to be a schmuck or emphasize his heretofore-â€‹concealed schmucky tendencies.”