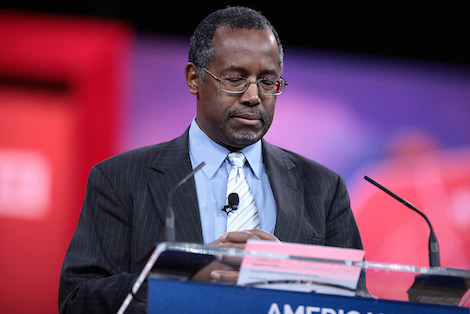 During the last Republican debate, Ben Carson threw out a line about the Chinese being involved in Syria. Later, when questioned on MSNBC, his spokesperson Armstrong Williams insisted that the information came from their intelligence briefings. My response was that perhaps it would be important to know who Dr. Carson was relying on for those briefings. Trip Gabriel reports that his top advisor on terrorism and national security is a man with a pretty colorful past and present – Duane Clarridge.

He was a longtime C.I.A. officer, serving undercover in India, Turkey, Italy and other countries. During the Reagan administration, he helped found the agency’s Counterterrorism Center and ran the C.I.A.’s Latin American division.

Running Reagan’s CIA Division in Latin American means supporting the brutal dictatorships of people like Roberto D’Aubuisson in El Salvador and Efrain Rios Montt of Guatemala. It also means being intimately involved with the School of the Americas where Latin American dictators sent their military personnel to be trained in anti-communist counterinsurgency tactics – like kidnapping and torture. As Greg Grandin wrote back in 2007:

In fact, it was in Latin America that the CIA and U.S. military intelligence agents, working closely with local allies, first helped put into place the unholy trinity of government-sponsored terrorism now on display in Iraq and elsewhere: death squads, disappearances and torture.

Most assuredly, it means that Clarridge was involved in Reagan’s attempt to overthrow the Sandinista government in Nicaragua by supporting the Contras – to the point of secretly selling arms to Iran in order to raise funds for them once Congress had prohibited such support via the Boland Amendment. As a result of that involvement, Clarridge was indicted for lying to Congress, but was eventually pardoned by President George HW Bush.

Duane R. Clarridge parted company with the Central Intelligence Agency more than two decades ago, but from poolside at his home near San Diego, he still runs a network of spies.

Over the past two years, he has fielded operatives in the mountains of Pakistan and the desert badlands of Afghanistan. Since the United States military cut off his funding in May, he has relied on like-minded private donors to pay his agents to continue gathering information about militant fighters, Taliban leaders and the secrets of Kabul’s ruling class…

His dispatches — an amalgam of fact, rumor, analysis and uncorroborated reports — have been sent to military officials…They are also fed to conservative commentators, including Oliver L. North, a compatriot from the Iran-contra days and now a Fox News analyst, and Brad Thor, an author of military thrillers and a frequent guest of Glenn Beck.

This, my friends, is the man who is a top advisor on national security to one of the front-runners for the Republican presidential nomination. Now…if all that isn’t bad enough, Clarridge had a few choice things to say about his current mentee – Ben Carson.

“Nobody has been able to sit down with him and have him get one iota of intelligent information about the Middle East,” Duane R. Clarridge, a top adviser to Mr. Carson on terrorism and national security, said in an interview. He also said Mr. Carson needed weekly conference calls briefing him on foreign policy so “we can make him smart.”

A potential presidential nominee who requires weekly briefings on foreign policy to “make him smart” is troubling. But knowing that the person on the other side of those briefings is a man like Duane Clarridge is seriously disturbing. But it explains a lot – like why Carson would dismiss adherence to the Geneva Conventions against torture as nothing more than political correctness.

Update: The Carson campaign is now trying to distance themselves from Clarridge – going so far as to accuse the NYT of taking “advantage of an elderly gentleman.” But dismissing him will be difficult after Armstrong Williams described Clarridge to Gabriel as “a mentor to Dr. Carson.”