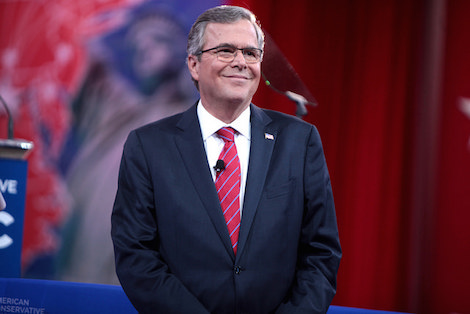 At the Plum Line today, Paul Waldman notes a rather puzzling aspect of Republican national security rhetoric now that it’s All About Terrorism. Jeb Bush is doing a big speech today calling for a significantly larger defense budget. Why is that?

While Republicans always want the military to be bigger than whatever it happens to be at any moment, I don’t think even they believe that its size is really the problem. It isn’t as though ISIS’ leaders are saying, “The United States military is down below 15,000 war planes! If they had 20,000, we could never oppose them, but this is our chance!” No, Republicans believe the problem is will. They think Barack Obama is weak and unwilling to use the military he has with sufficient enthusiasm. They think our enemies don’t fear us enough, not because they aren’t intimidated by American weaponry, but because they aren’t intimidated by the man in the Oval Office.

I realize they might want to sound hawkish on defense spending on order to distinguish themselves from Rand Paul, but why create all the fiscal problems associated with a defense spending buildup if you have an alternative strategy for making the country’s defenses stronger: a big strong macho president who likes to kill bad guys and doesn’t mind deploying troops into multiple combat zones and understands the credible threat to use force is a money-saving asset in itself.

You may recall that when Jeb Bush’s older brother was running for president in 2000 he promised greater “humility” in foreign policy but also argued the Clinton administration had allowed the armed forces to atrophy. Promising to throw money at the Pentagon made sense in that campaign. Now you have the polar opposite of humility at play in GOP national security rhetoric. These birds are rough and ready. So why suggest that’s not enough? Beats me.