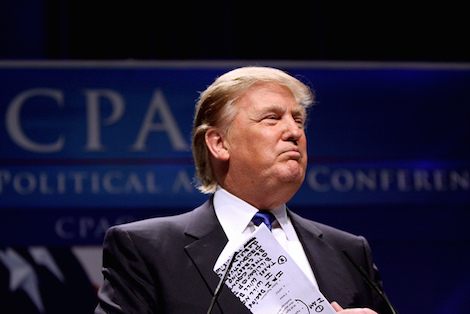 According to Beth Reinhard and Janet Hook at the Wall Street Journal, establishment Republicans are preparing to mount yet another attempt to bring down the candidacy of Donald Trump.

The Republican establishment, increasingly alarmed by the enduring strength of Donald Trump’s presidential bid, is ratcheting up efforts to knock him out of the race, including the first attempt to unite donors from rival camps into a single anti-Trump force.

The challenge becomes: what’s the message?

One possible ad would link Mr. Trump’s views and style to his celebrity foe, Rosie O’Donnell, in hopes of provoking a reaction from Mr. Trump, according to the memo.

Other possible tactics include fake pro-Trump ads that show him supporting socialized medicine, seizing property through eminent domain and taking other positions that stray from GOP orthodoxy; using a Trump impersonator to show him insulting people; and attacking his business record in “stark, nasty terms.”

I could save these folks a lot of money by suggesting that’s not going to work. His supporters are clearly not going to stand up to defend Rosie O’Donnell and they sure don’t care about any GOP orthodoxy.

Of course, the approach Marco Rubio tried last week to out-Trump “the Donald” carries a bit more punch. After the front-runner talked about shutting down mosques in response to the attacks in Paris, Rubio simply upped the ante.

That is a perfect example of what the candidacy of Donald Trump is doing to the Republican Party. During this primary, none of them dare call him out for these kinds of fascist remarks (yeah, I went there) because the entire edifice has been built on ramping up the fear. Anything short of where Trump takes things will be viewed by their voters as the kind of “appeasement” they hear from Democrats.

In an article about the recent rise of the candidacy of Ted Cruz, Benjy Sarlin captured the Texas Senator’s approach to all this.

…Cruz has done more than just avoid criticizing Trump – he has used the real estate mogul as market research to nail down the often unpredictable id of the populist right and then shifted his own positions and rhetoric accordingly.

That’s what this Republican primary is all about right now…finding a way to appeal to “the often unpredictable id” of their base. When a party spends 7 years fanning the flames of fear and opposition rather than actually governing, what else would you expect?