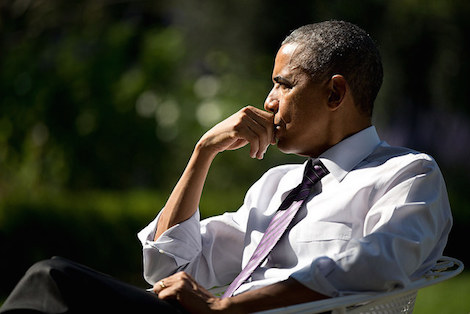 Jeff Greenfield’s article titled: Getting the Politics of Fear Right got me thinking about what leadership means at a time like this. He acknowledges that following the Paris attacks, Donald Trump “went on a fear-mongering bender.” But then he finds President Obama’s response to be problematic as well.

Meanwhile President Obama has tacked sharply in the other direction, playing down the public’s anxiety, defiantly continuing to downgrade the possibility of an attack on the U.S. and the capabilities of Islamic State…Obama’s dismissiveness is no doubt one reason for Trump’s popularity; clearly many voters believe our current crop of leaders – starting with the president – have been too inattentive to their fears.

This is not an uncommon critique of President Obama. Way back in 2010 during the Deepwater Horizon oil spill, Maureen Dowd led a chorus of people complaining about the fact that the President didn’t seem to feel our panic.

Once more, he has willfully and inexplicably resisted fulfilling a signal part of his job: being a prism in moments of fear and pride, reflecting what Americans feel so they know he gets it.

So this is nothing new. We heard the same thing during the Ebola scare and every other crises we’ve faced over the last 7 years. It all makes me think about what it is we want in a leader.

I was reminded of a powerful diary written years ago by a blogger named Hamden Rice about the leadership of Martin Luther King. The parallels with our current situation eventually break down, but Rice pointed out that King emerged to lead African Americans during a time that they were experiencing the terrorism of Jim Crow.

But this is what the great Dr. Martin Luther King accomplished. Not that he marched, nor that he gave speeches.

He ended the terror of living as a black person, especially in the south…

It wasn’t that black people had to use a separate drinking fountain or couldn’t sit at lunch counters, or had to sit in the back of the bus…

This constant low level dread of atavistic violence is what kept the system running. It made life miserable, stressful and terrifying for black people.

And what was King’s response to that terror?

They told us: Whatever you are most afraid of doing vis-a-vis white people, go do it. Go ahead down to city hall and try to register to vote, even if they say no, even if they take your name down.

Go ahead sit at that lunch counter. Sue the local school board. All things that most black people would have said back then, without exaggeration, were stark raving insane and would get you killed.

If we do it all together, we’ll be okay.

One has to wonder if folks like Greenfield and Dowd had been around back then, would they have complained that MLK was too inattentive to their fears?

When it comes to the current threat of terrorism, President Obama plays a very different role in this country than the one Dr. Martin Luther King did all those decades ago. But interestingly enough, yesterday his message sounded pretty similar.

What happened in Paris is truly horrific. I understand that people worry that something similar could happen here. I want you to know that we will continue to do everything in our power to defend our nation…

But it’s not just our security professionals who will defeat ISIL and other terrorist groups. As Americans, we all have a role to play in how we respond to threats. Groups like ISIL cannot defeat us on the battlefield, so they try to terrorize us at home – against soft targets, against civilians, against innocent people. Even as we’re vigilant, we cannot, and we will not, succumb to fear. Nor can we allow fear to divide us – for that’s how terrorists win. We cannot give them the victory of changing how we go about living our lives.

That is exactly the kind of leadership this country needs right now to combat the politics of fear.