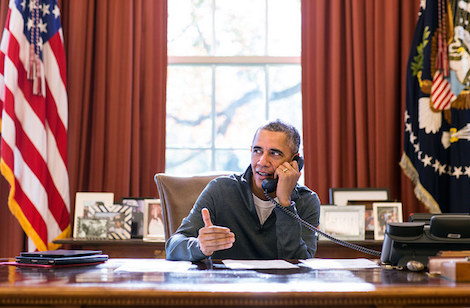 The Republican meme about ISIL these days is that, if you don’t call them by the right name, you won’t be able to defeat them. Eli Berman and Jacob Shapiro suggest that there is something more significant that we need to understand about ISIL in order to defeat them.

Is it a tremendously well-resourced terrorist group that controls substantial territory, which it uses to plan attacks, vet operatives and manage a complex financial network? Or is it a fledgling nation-state that sponsors terrorist attacks?

They go on to provide evidence that the latter is a better description of ISIL and that is why President Obama’s containment strategy makes sense.

We’re fighting a failed state in the making, one that will implode if merely contained, and will collapse even faster under coordinated economic and military pressure from its neighbors.

But then they go on to describe an additional benefit to containment by drawing a comparison with the president most idolized by Republicans.

In weighing whether to attack or contain the group, there’s one other consideration that hasn’t yet received enough attention: The ideological benefits of allowing it to collapse by itself. No one uses communism to rally rebels anymore (save for a few small groups in India); the collapse of communist states in the 1990s demonstrated to everyone how ineffective the ideology was at running a modern economy. As Ronald Reagan correctly saw, allowing communism to collapse of its inherent contradictions would discredit it forever.

As the Soviet Union was to communism, so ISIL is to jihadism: the purest articulation of a noxious ideology of governance, which incidentally has little connection to Islam. If we allow it to fail, then it will be clearly a failure of ISIL as an idea. The same is not true of a military defeat at the hands of Western forces. Given its deep structural weaknesses and its symbolic value in the global war of ideas, our best strategy is almost surely one based on containment, allowing the group’s motivating ideology to destroy the group from the inside—and thus more rapidly find its proper place in the dustbin of history.

For some of us, that might be giving President Reagan more credit than he deserves. We can argue over the application of the analogy, but I have to admit that it is a rather genius move by Berman and Shapiro to state, “as the Soviet Union was to communism, so ISIL is to jihadism.” There is a lot of wisdom in linking the two. The war hawks have always relied on fear-mongering to promote both military build-up and foreign interventions. Thus, they simply replaced the fear of communism with the fear of terrorism. But if ISIL is to jihadism what the Soviet Union was to communism, then it makes sense that the best strategy is to promote the failure of the idea via the failure of the state.

I don’t expect the war hawks to grasp the wisdom of that strategy. But it is incumbent on the rest of us to be able to understand and articulate the alternative to their escalations – which only feed into the stated goals of ISIL.