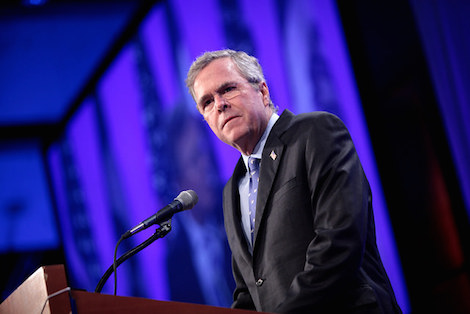 When the Bush family is your friend:

On the night of the 2010 midterm elections, a portly, silver-haired Jeb Bush stood on a stage in the courtyard of Miami’s luxe Biltmore Hotel, appearing to choke back tears. The beloved former governor of Florida was there to introduce the young conservative insurgent who had just pulled off a remarkable underdog victory in the U.S. Senate race.

“Bushes get emotional, so I’m gonna try my hardest,” Jeb told the ecstatic crowd of Republicans. “My wife told me, ‘Don’t cry, don’t cry.’ But Marco Rubio makes me cry for joy!”

At the time, it looked like the culmination of a sturdy alliance and deep friendship — the proud mentor presenting his protege.

When the Bush family is not your friend:

Meanwhile, in a series of off-the-record conversations, Jeb’s messengers tried to convince a number of influential figures in political media that they had the goods on Rubio. Among these was MSNBC host Joe Scarborough. A former Republican congressman from Florida who remained tapped into the state’s politics, Scarborough was skeptical whenever somebody tried to convince him that Rubio had an explosive career-ending secret lurking in his past.

“Everybody who runs against him says he has girlfriends, or financial problems. They throw a lot of shit at the wall,” Scarborough told me. “It’s the same thing from the Jeb Bush camp. They keep telling me, ‘Oh, we’ve got the thing that’s going to take him down.’ But nobody’s ever produced anything that we all haven’t read in the Tallahassee Democrat.”

Back in October 2004, Richard Gooding did a deep-dive for Vanity Fair on how the Bush machine had trashed John McCain during the 2000 South Carolina primary. It’s the kind of piece that merits an occasional re-reading, especially whenever there’s a Bush running for president, which seems to be most of the time.

There appears to be no doubt that Team Jeb is prepared for a repeat performance and that Marco Rubio is their target. Round One was during the early fundraising/endorsement phase of the campaign. Round Two is coming up shortly.

Yet, it may be too little, too late. Politico reports that Republican senators are so concerned about Ted Cruz that they’re beginning to coalesce behind Rubio. This is basically an acknowledgment that Jeb simply has no juice and is never going to rise out of his doldrums. In fact, Jeb may find that there’s no appetite for the Phase Two attack on Rubio from the Republican Establishment because they now see Rubio as their last opportunity to avoid a catastrophic situation where their nominee comes from the Trump/Carson/Cruz camp.

Trump and Carson are seen as unfit for the office of the presidency, and Cruz is simply loathed. All three of them are considered poor general election candidates who have to potential to put the GOP’s congressional majorities (especially the Senate) at risk.

If Jeb’s minions go out there floating rumors that Marco Rubio has a secret family and a bushel of mistresses, that’s not going to fly. It would be one thing if this were going to work for Bush, but the latest Quinnipiac poll out of Iowa has him at four percent. I mean, even the moribund Rand Paul campaign is at five percent.

If the Bushes tear down Rubio without rising themselves, there’s no one left to stop the barbarians at the gates of the Republican National Convention.

It may simply be too late for Team Bush to do anything at all about their situation. Assuming, that is, that they want to retain any good will with the Republican Establishment at all.