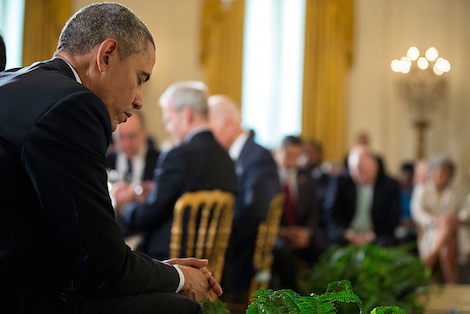 If you are feeling deja vu all over again, there is a reason. The last time we saw this picture, Republicans and the media had joined hands to get everyone in a panic about Ebola. There were calls for travel bans and quarantines that had no basis whatsoever in any rational plan to deal with the spread of the disease.

Meanwhile, President Obama and his team calmly went about taking steps that actually addressed the problem.

But of course, there was no “after-action” review of who was right and who was wrong. Once the scare-tactics had played their course, we went on to the next crisis-of-the-day.

The Paris attacks happened a little more than two weeks ago. We were immediately subjected to panicked responses suggesting that we not allow any Syrian refugees into this country.

President Obama and his team have calmly described the rigorous two-year process that refugees must go through to come here.

But beyond that, many have pointed out that if a terrorist really wanted to get into the United States, the very last avenue they would chose would be to go through the refugee program. Given that all of the people responsible for the attacks in Paris were Belgian or French nationals, they could have easily entered the United States through the visa waiver program.

And so, President Obama and his team just announced some changes to the program that allows travelers from 38 countries to come to the U.S. without a visa.

The White House announced several steps, including attempting better tracking of past travel, fines for airlines that don’t verify passport data, assisting other countries on the screening of refugees and with border security.

It is also promising reports to the president in two months from the State Department and the FBI about how to include better fingerprinting and photographing, as well as an evaluation of the state of intelligence coordination between the U.S. and its allies.

Paul Waldman wrote a wonderful tongue-in-cheek column yesterday about how “manipulating the public’s emotions has never been Obama’s strong suit.” Funny thing about that guy…he seems to think that calmly solving problems and protecting the American people are what we elected him to do. Imagine that!