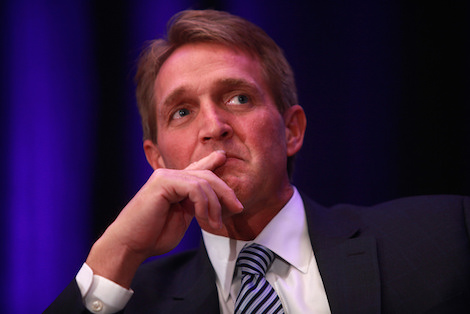 According to Nahal Toosi and Patrick Temple-West at Politico, it looks like the fever might be starting to break over the Syrian refugee panic – at least among Republican lawmakers. After the House passed a bill that basically halted the flow of refugees from Syria and Iraq, some are having second thoughts.

Some Republican lawmakers are expressing concerns about the House bill, saying refugees pose less of a national security threat than foreigners who arrive by other means.

Hmmm…that sounds an awful like what some of the rest of us have been saying for awhile now. What is interesting to note with this change is the various factors that have led these lawmakers to re-think things. According to Toosi and Temple-West, they include:

* Sen. Jeff Flake (R-AZ) says that the refugee program “is down the list a ways in my view, in terms of our security threats and issues,” (in other words, he’s sounding downright rational).

* Rep. Steve Russell (R-OK) knows a Syrian-American who’s mother died before she was able to leave the war-torn country.

* Lobbying against the bill are conservative advocacy groups like the National Association of Evangelicals.

* National security experts, including conservatives like Henry Kissinger, David Patraeus and Michael Chertoff sent a letter to members of Congress asking them to stop the House bill.

* But the most disconcerting reason was identified Tyler Deaton, who has been lobbying for the U.S. Committee for Refugees and Immigrants.

…Deaton added that few lawmakers know much about how the U.S. refugee resettlement program operates. They are not aware of the myriad safeguards in place when it comes to vetting refugees, the priority the program gives to orphans, widows and others who are especially vulnerable, or the relatively small number admitted—70,000 a year, with plans to go up to 100,000 in two years, Deaton said.

So, in a moment of panic created by the Paris attacks, Republicans in the House (with an assist from 47 Democrats) passed a bill to stop a process that most of them didn’t know much about. Yes, we should be outraged about that! Let’s just hope that some of these saner voices prevail and stop this fevered panic.