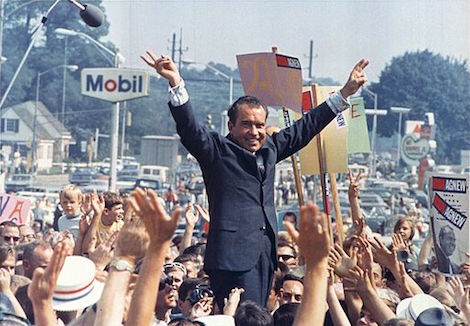 Sometime soon, I am going to delve into an issue over which Ed Kilgore and I disagreed. There are two schools of thought about the American electorate. One, which Ed subscribes to, is that the country is rigidly polarized and that on the presidential level a major party candidate is pretty much assured of about 45% of the popular vote. Elections are decided, therefore, much less by convincing the undecided and true swing voters than by differential turnout. Republicans win low turnout midterm elections, especially when there is a Democrat in the White House, and Democrats generally win high turnout presidential elections, unless there is a Republican incumbent.

There’s no doubt that this accurately describes how our politics have been since at least 2004. Given the popular vote outcome of 2000, you can even argue that the pattern had been established by then.

The other school of thought is that our two-party system is more like plate tectonics. The two parties have been locked in a stable pattern for a while now and the pattern can certainly persist into the future. But, every once in a while there is a slip along the dividing line and one party leaps ahead and gains a decisive advantage. This happened in 1972, for example. President Nixon certainly didn’t foresee how decisively he’d win that election. If he had, he wouldn’t have broken so many laws and engaged in so many dirty tricks. Yet, when you look back at 1972 with the benefit of hindsight, all the signs were there that the Democrats were approaching a complete wipeout.

I think you can say the same thing about the 1994 Gingrich revolution in Congress. The Democrats had controlled the House almost uninterrupted since 1933. People had a hard time predicting that they’d lose control at all, let alone with a lot of room to spare. But the signs were definitely there if you had the eyes to see.

So, I subscribe to this second school of thought which says that you can’t precisely predict when a political earthquake will happen, but you can look for key indicators. The political system is in a 45%-45% deadlock until it isn’t. A political analyst’s job is to assess whether or not this cycle is when The Big One hits.

When I get the chance, I’ll talk about the signs of a realignment that I’m seeing. As a teaser, however, this piece by Fox News contributor Juan Williams is a good start.

To be clear, part of my point is that presidential politics are a lot like plate tectonics. You can understand the processes quite well and still not be able to do a good job predicting when things will suddenly change. We could wind up with another election that finishes somewhere between 53%-47% and 50%-50%. There is some pretty powerful stability to how the two parties are divided among the electorate.

I just think we’re getting close to another landslide election and I see signs everywhere that it will be bad news for the Republicans.