* A new CNN/ORC poll was released today showing that Ben Carson continues to lose ground. Here’s who is benefiting from that:

Cruz (up 12 points) and Trump (up 9 points) are the greatest beneficiaries of those declines. Rubio is also up slightly, gaining 4 points…

And so, here’s the state of the race as we head into the weekend: 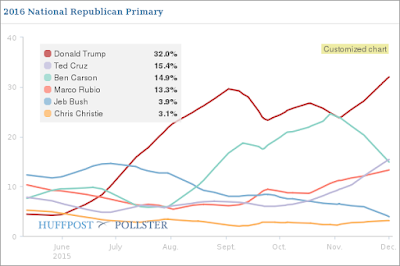 * In about a month, the Supreme Court will decide whether to hear the case related to President Obama’s executive actions on immigration. Democratic lawmakers decided to weigh in.

More than 200 congressional Democrats are throwing their weight behind the Obama administration’s appeal to the Supreme Court to take up a legal case that has stalled President Barack Obama’s executive actions on immigration.

The Democrats’ amicus brief argues that Obama’s immigration program, called Deferred Action for Parents of Americans, is no different from long-held precedent that gives the executive branch considerable power over implementing immigration policies. The president has the right to set certain enforcement priorities in terms of which immigrants to deport, the brief argued, and use discretion in how those priorities are carried out.

* When it comes to the anti-Muslim rhetoric we’re hearing from Republicans, Fareed Zakaria suggests it is unprecedented.

What is most bizarre is to hear this anti-Muslim rhetoric described as brave truth-telling. Trump insists that he will not be silenced on this issue. Chris Christie says that he will not follow a “politically correct” national security policy. They are simply feeding a prejudice…

This is the first time that I can recall watching politicians pander to mobs — and then congratulate themselves for their political courage.

* Daniel Luzer says that Gov. Walker’s assault on tenure is just the beginning. The next stage will be worse. The next financial crisis will result in more drummed-up political resentment against professors, and then politicians will cut some other benefits.

* Finally, David Atkins will be in over the weekend. As I sign off, all of the talk about “thoughts and prayers” reminded me of another song by the great Leonard Cohen – Anthem.

I can’t run no more
with that lawless crowd
while the killers in high places
say their prayers out loud.
But they’ve summoned, they’ve summoned up
a thundercloud
and they’re going to hear from me.