* We’ve all been waiting anxiously for Russian President Vladimir Putin to weigh in with his thoughts about Republican presidential candidate Donald Trump…haven’t we? Today he finally did. In a sane world, this would qualify as a “death hug.”

“He’s a very lively man, talented without doubt,” Putin said according to the Interfax news service after the news conference. He added that Trump is the “absolute leader in the presidential race.”

* For a while now I’ve been saying that one of the reasons television ads aren’t working for candidates these days is because no one is watching them. Check out what Patrick Ruffini tweeted today:

Running a Google Consumer Survey in Iowa with a striking finding. 65% report seeing no campaign ads despite 3,000+ booked spots.

That includes over 50% of seniors.

There is no progress that cannot be rolled back if those who benefit from it lack the power to maintain it.

There is also no arbitrary line Trump can cross that will unify the country against him. There is only power, those who can project it, and those who can check it. At this moment, the firewall against Trumpism is not Republican primary voters or the party leadership. It is the religious and ethnic groups in America who see Trump’s prejudice as a reflection of the same ones they face and have leveraged enough hard-won victories to have a say in the political process. It is the American electorate. But it is only that.

* Equally compelling is this article by Rebecca Traister titled: The Election and the Death Throes of White Male Power.

* Finally, it appears as though Morocco will become the super-power of solar power. 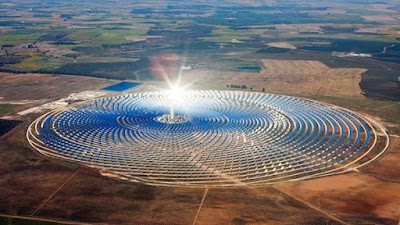 Located outside the city of Ourrzazate, the plant will take up the same amount of space as Morocco’s capital, Rabat, and will generate 580 megawatts of electricity.

The plant employs a large number of movable mirrors that can follow the sun’s path and harness sunlight to melt salt. The molten salt stores energy and can be used to power a steam turbine, allowing for energy production even at night.