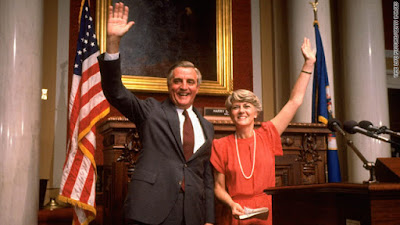 I remember back in 1984 when I first heard rumors that Walter Mondale was considering the possibility of nominating a woman as his Vice Presidential running mate, my reaction was pretty dismissive. I thought, “Pffttt…another woman in a supporting role, no big deal.”

But then as I watched him actually announce that Geraldine Ferraro would be his running mate, I cried. The tears totally surprised me – I didn’t see them coming. Their source was not my rational mind. Instead, they came from something very deep inside.

I saw the same kinds of tears on the faces of people at Grant Park in Chicago on the night Barack Obama was elected in 2008. 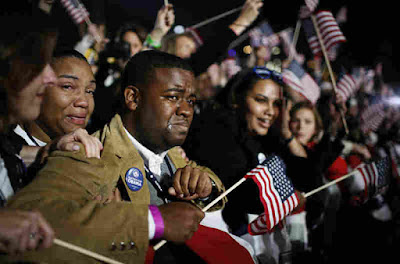 That is the power of symbolism. It touches the place that needs to hear, “You belong.” Whoopi Goldberg captured that very well the next morning when she said, “I’ve always considered myself an American, but for the first time last night, I felt like I could finally put my bags down.” We should never underestimate the power of “you belong” for people who have felt marginalized in our culture. It is not something that we articulate often on a rational basis, but it resides deep in our being.

On the other hand, there are limits to symbolism. There is a lot more that goes into making up our identity than the fact that we are a woman, or African American, or a member of another group that has been marginalized. We are complex human beings with a variety of thoughts and feelings when it comes to politics.

That is something that Republicans (and some Democrats) don’t seem to understand about symbolism. It’s why John McCain chose Sarah Palin as his running mate and thought that is all he needed to do to reach out to women. And it is what some pundits and political strategists think will happen with candidates like Herman Cain and Ben Carson. In many ways that kind of thing only perpetuates the marginalization by assuming that we can be reduced to the fact that we have a uterus or a heavier dose of melanin.

Keep that in mind when you hear pundits assume that a presidential candidate like Marco Rubio will attract Latino and/or young voters. It is, first of all, insulting to many Hispanics to ignore the very real differences between Mexican-Americans, Cuban-Americans, Puerto Rican-Americans, etc. And, of course, it assumes a linkage between both cultures and complex human beings that is reduced to the fact that – for the most part – they share the same language.

I also know of no better way to insult young people than to suggest that the most important thing about them is their age. What most young people are telling us these days is that they are ready to move past the racism/sexism/homophobia that has divided us for so long and get busy tackling things that actually affect their future – like education and climate change. I think they’re smart enough to chose a candidate who speaks to those issues and not get hung up on the year they were born.

So yes, there is power in symbolism. But to assume that marginalized voters can be reduced to one demographic factor is why the word “token” was introduced into discussions about diversity. It is demeaning to think that’s all that matters.