It’s obvious to everyone that the Republican presidential candidates do not support a woman’s right to chose, fair pay or things like access to quality child care. But those aren’t the only way that sexism is on display in this primary election.

Last week Martin Longman pointed out that the current round of Clinton critiques completely fails to distinguish between sexual abuse and infidelity. That is an age-old problem in which too many fail to understand that things like rape, sexual abuse and sexual harassment are less about intercourse than they are about power.

Almost as soon as New York magazine posted a short item online about Rubio’s “high-heeled booties,” there was Ted Cruz’s communications director, Rick Tyler, tweeting a link to it: “A vote for Marco Rubio Is a Vote for Men’s High-Heeled Booties,” he wrote…

“You won’t see me wearing them,” Trump said on the radio Thursday. “I don’t know what to think of those boots.”

Ever the savvy provocateur, Trump suggested with uncharacteristic subtlety that the 5-foot 10-inch Rubio — or is he actually 5-foot 8? — might have a bit of a short man’s complex.

I have no need to defend Sen. Marco Rubio as a presidential candidate. But insinuating that the boots he wears are a reflection of his manhood (i.e., look too womanly) is something to which I take offense.

But what could elevated one’s manhood more than mocking the “softness” of the tough-guy champions who play professional football? That’s exactly what Trump did yesterday.

As a feminist, I see that kind of nonsense coming from someone who is extremely insecure in his masculinity. As an alternative, here’s a guy who doesn’t need to play those games. 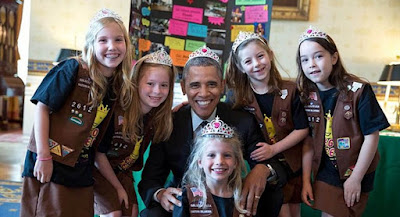