* A lot of pundits have been trying to parse out whether Sanders or Clinton come closer to Obama’s theory of change. While he grossly oversimplifies Obama’s approach, I think Jonathan Chait gets it right when he says that they actually have three distinct strategies. But only two of them are on the ballot this time.

Obama in 2008 believed Republicans could be reasoned out of their irrationality. Sanders today believes they can be swept aside when the people rise up and depose their corporate paymasters. Clinton, then as now, promises to grind away at them in a trench war that has gone on for decades and for which there is no end in sight.

* Kevin Drum has a little fun with: How Big a Dick is Ted Cruz? A Quiz.

* Both Greg Sargent and Caitlin MacNeal think that President Obama subtly made the case for Hillary Clinton over Bernie Sanders during his interview with Glenn Thrush. What I heard was a more factual assessment of each candidate’s strengths and weaknesses and an analysis of the race so far. But if current Cabinet members are any indication, the White House position is pretty clear.

* Timothy Zick argues for a more expansive view of the first amendment.

The First Amendment applies at home, but surely it stops at the water’s edge: ISIL can’t complain if the U.S. takes steps to destroy its communications network abroad, and Sharia laws can’t replace American ones. Well, yes.

But the First Amendment is bigger and broader than this provincial caricature. It has a more cosmopolitan dimension, one that is concerned with preserving and protecting cross-border expressive and religious rights.

The term “cosmopolitan” may make some Americans uneasy; let me clarify that it is not meant to suggest the displacement of American laws, values, or commitments. First Amendment guarantees are the widest protections of free speech and religious freedom in the world. I do not wish to bury First Amendment exceptionalism, but rather to situate it. “Cosmopolitan,” as I am using the term, conveys one basic idea: the First Amendment guarantees that Americans can speak, and listen, to the world outside as well as dialogue within its borders. 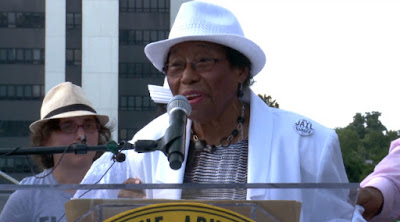 Here is what Ms. Eaton experienced in 1942 when she tried to vote:

In 1942, the 21-year-old Eaton took a two-hour mule ride to the Franklin County courthouse in eastern North Carolina to register to vote. The three white male registrars told her to stand up straight, with her arms at her side, look straight ahead and recite the preamble to the Constitution from memory. After she did that word for word, they gave her a written literacy test, which she also passed. Eaton was one of the few blacks to pass a literacy test and make it on the voting rolls in the Jim Crow era.

And here’s what she went through recently due to the fact that her name on her voter registration was slightly different than the one on her drivers license.

That is NOT progress.