* Vox teamed up with Morning Consult to do an online facial recognition poll of several presidential candidates (they also threw in a few celebrities as a baseline). The results demonstrate why Marco Rubio’s campaign continues to struggle. 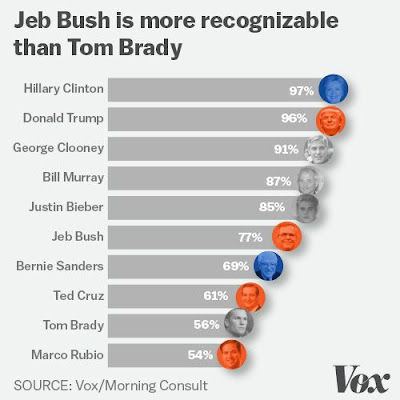 * Is Bernie Sanders just trying to downplay the expectations game for the Iowa caucuses? If not, it gets hard to understand how he’s leading a revolution when he stays things like this.

Bernie Sanders said Tuesday that he clearly needs a strong voter turnout to win in Iowa on Monday, but he has no expectation of reaching the high-water mark set by then-Sen. Barack Obama in 2008.

“Obama in 2008 ran a campaign which is really going to stay in the history books. It was an unbelievable campaign. In places they ran out of ballots, as I understand,” Sanders told reporters after a meeting with the United Steelworkers in Des Moines, Iowa. “The turnout was so extraordinary, nobody expected it. Do I think in this campaign that we are going to match that? I would love to see us do that, I hope we can.”

But he added, “Frankly, I don’t think we can. What Obama did in 2008 is extraordinary.”

* Yesterday in “Quick Takes” I noted the members of President Obama’s cabinet who have endorsed Clinton. But Sahil Kapur spoke to some former staffers who weighed in as well.

“Then-Senator Obama ran for President to tackle longstanding challenges that our country had debated for decades but was unable to resolve. A ‘politics as the art of the possible’ candidate,” Ben LaBolt, a national spokesman for Obama’s 2012 campaign, said in an e-mail. “Senator Sanders has been in Congress for decades but hasn’t tackled any major longstanding challenges—he’s been too busy shouting his point of view across the aisle with few results.”

Jon Favreau, who worked on the Obama 2008 campaign before becoming a speechwriter for the president, said Sanders’ campaign “resembles Howard Dean’s a lot more than it resembles Barack Obama’s.” In key respects, he said, “Hillary is much closer to Obama than Bernie is.”

* A report from the New American Leaders Project discusses the obstacles Asian Americans and Latinos face in getting elected to local and state offices.

Among the barriers members of these groups faced is that they were less likely to come up with the idea of running for office themselves — usually only doing so if the idea was suggested by another person. Hispanic women also were likelier to report being discouraged “by their political party more than any other group,” the report noted.

The candidates also tended to rely strongly on support from unions and community groups to be successful, and they found fund-raising one of the most difficult hurdles. That was particularly true among Hispanic women, according to the report.

I’m incredibly proud to have a partner in my wife Sophie, who is extremely committed to women and girls’ issues. But she took me aside a few months ago and said Okay, it’s great that you’re engaged and modeling to your daughter that you want her empowered and everything, but you need to take as much effort to talk to your sons—my 8-year-old boy and my 2-year-old—about how he treats women and how he’s going to grow up to be a feminist just like dad.

* Finally, today is the 20th anniversary of the opening of the musical Rent on Broadway (feel old yet?) In honor of the occasion, how about some “Seasons of Love?”