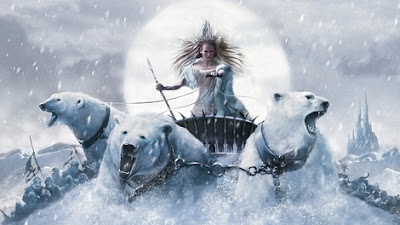 One of the most beloved children’s series in evangelical households is the Chronicles of Narnia by novelist and lay theologian C.S. Lewis. Given that I grew up in a home/community where they were revered, it dawns on me that I have no idea how well-known they are outside those circles. You’ll have to let me know.

The reason that I bring them up is because, just as we learn that Jerry Falwell, Jr. has formally endorsed the candidacy of Trump, it might be interesting to know that all evangelicals (even those who are extremely conservative) aren’t necessary jumping on The Donald’s bandwagon. One writer used the Chronicles of Narnia to explain why.

Gina Dalfanzo taps into a story in the second book of the series, Prince Caspian, to remind us of the time when Narnians were so threatened by their enemies that they were counseled to call up the White Witch to save them, the very one who had killed Aslan (the God-character) in the previous book The Lion, the Witch and the Wardrobe.

Dalfanzo says that in this struggle, C.S. Lewis was prescient.

This is how good people with strong, ingrained values—people who have invested time and money in the sanctity of life, religious liberty, and similarly noble causes—can come to support a man who changes his convictions more often than his shirts. This is how people concerned about the dignity of the office of President end up flocking to a reality-show star who spends his days on Twitter calling people “dumb” and “loser.” This is how some who have professed faith in Jesus Christ are lured by a man who openly puts all his faith in power and money, the very things Christ warned us against prizing too highly. As one wag on Twitter pointed out, “If elected, Donald Trump will be the first US president to own a strip club,” and yet he has the support of Christians who fervently believe that this country needs to clean up its morals…

Tired of waiting for Aslan—who may be nearer than we think—we turn elsewhere. It doesn’t matter if our candidate hates, bullies, and exploits other people, the reasoning goes, just as long as he’s good to us and gives us what we want. Hatred is a perfectly acceptable weapon, as long as it’s “on our side.”

I will note that, like Trump (and Cruz) supporters, Dalfanso takes it as a given that Christians are under siege. But the lesson of Narnia is that, to take up hatred as an acceptable weapon is the wrong choice.

I don’t share this because I agree with Dalfanso – but because it exposes the layers of nuance going on among Christian conservatives in this Republican presidential primary.

Besides…how can you resist the allure of comparing Donald Trump to an evil White Witch?