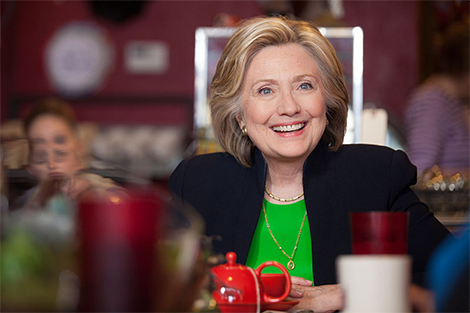 Mike Davidson for Hillary for America/Flickr

When we elected our first African American president in 2008, his race wasn’t the central issue. Except for his speech following the controversy about Rev. Jeremiah Wright, Barack Obama didn’t make it central to his campaign. His appeal had more to do with what David Axelrod identified.

Here’s the gist. Open-seat presidential elections are shaped by perceptions of the style and personality of the outgoing incumbent. Voters rarely seek the replica of what they have. They almost always seek the remedy, the candidate who has the personal qualities the public finds lacking in the departing executive.

In other words, in a country that had gone sour on George W. Bush, Barack Obama was the anti-Bush in almost every way that mattered.

But it wasn’t long before race became a central theme in the insurgency that erupted against this President. That was coupled with what Tim Wise called “the perfect storm for white anxiety,” including the fact that the changing demographics in this country foretell a non-white majority.

Now we face the very real possibility of electing the first woman as president. That’s what makes this recent report by Gabriel Sherman so interesting. It is the result of interviewing 100 Republican voters in Iowa and New Hampshire. Here’s part of the summary:

We tried to discern not just their candidate preferences but their worldviews. National security and the economy ranked among their top concerns, and health care, immigration, and gun control were important. But issues didn’t really seem to be the point. It was common to hear voters say they could choose any of the candidates across the ideological spectrum. “I like Christie because of his executive experience,” said Greg Mason, a 59-year-old IT engineer from Manchester, New Hampshire. “Carly Fiorina impresses the living death of me. I like Marco Rubio. Cruz. And Trump, I don’t agree with his positions, but he’s got the testicular fortitude to come out and say people are desperate.”

The phrase seemed telling. If there was anything almost all of the respondents sought in a candidate, it was that testicular fortitude — or, in less colorful terms, strength. It’s why Trump has steamrolled his rivals despite his ideological inconsistencies as a Republican. And it’s why Jeb Bush and Marco Rubio have failed to connect: Being labeled a nerd in this GOP primary is the kiss of death; being cast as a sissy is even worse. Machismo even seems to be Carly Fiorina’s best selling point.

The primacy of “testicular fortitude” as an understanding of what it means to be strong has definite undertones of sexism in a way that we don’t often understand the term. It not only aligns with a sexist view of gender, it harkens back to the idea that dominance is the only form of power.

Clearly, Hillary Clinton is putting her gender front and center in this campaign in a way that Barack Obama didn’t do with his race in 2008. But what that means is a much more subtle challenge to patriarchy than is typically expressed when we talk about specific issues like reproductive rights, fair pay, etc. Underneath all of those issues will be the question of whether or not voters are looking for strength only through the lens of “testicular fortitude.” As feminists know, there are other ways of defining that word. For example, Betty White put the whole question in a way that only she can get away with: 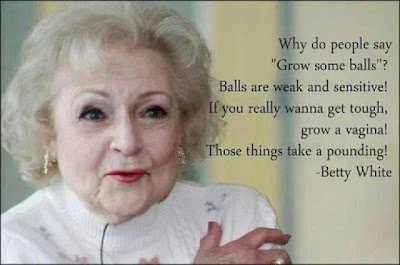 The fact that Republicans are hungry for some “testicular fortitude” is an underlying challenge to electing our first woman president. And it is why Rebecca Traister articulated what is at stake so well.