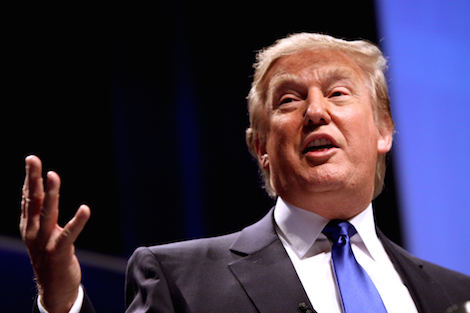 As of this writing, it looks like Donald Trump will not participate in tonights Republican presidential debate hosted by Fox News. I qualify that because – knowing the two sides involved in this battle – it wouldn’t surprise me to see further developments throughout the day. But here is Trump answering questions about all this yesterday at a press conference.

What struck me as I listened to it was that – based on his sentence structure – I’m guessing that he and Sarah Palin had the same English teacher in school. They both seem to have an appetite for the same kind of word salad.

The best I can make of Trump’s diatribe was that he has three problems. The first, of course, is that he doesn’t like Megyn Kelly. He also talks repeatedly about how “they” should donate money to Wounded Warriors. Those sound like excuses to me. What he really didn’t like is the statement Fox News issued when one of his spokespersons issued this threat.

In a call on Saturday with a FOX News executive, Lewandowski stated that Megyn had a ‘rough couple of days after that last debate’ and he ‘would hate to have her go through that again.’ Lewandowski was warned not to level any more threats, but he continued to do so.

Here is the Fox News response that Donald is so upset about:

We learned from a secret back channel that the Ayatollah and Putin both intend to treat Donald Trump unfairly when they meet with him if he becomes president — a nefarious source tells us that Trump has his own secret plan to replace the Cabinet with his Twitter followers to see if he should even go to those meetings.

That last part has to do with the fact that Trump asked his twitter followers to weigh in on whether or not to participate in this debate. But what it comes down to is that Trump tried to bully Megyn Kelly and the folks at Fox News made him the brunt of their joke.

What seems clear to me about all of this is that the best way to get under Trump’s skin is to challenge his “testicular fortitude.”

I don’t offer that as any serious political commentary – after all, when it comes to a battle between Donald Trump and Fox News, I don’t have a dog in that fight. But it is a perfect example of just how dumbed-down this whole spectacle has become.