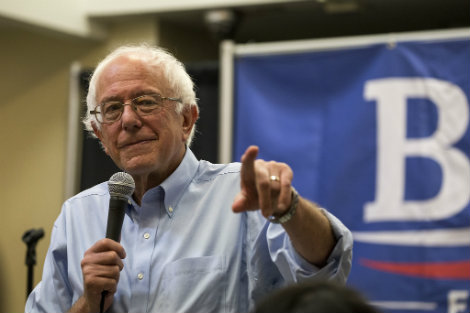 The more I listen to and read about Bernie Sanders, the clearer it becomes that there is one central theme we need to understand about him on which almost everything else rests. It is what he clarified in the last Democratic debate.

In all due respect, you’re missing the main point. And the main point in the Congress, it’s not the Republicans and Democrats hate each other.

That’s a mythology from the media. The real issue is that Congress is owned by big money and refuses to do what the American people want them to do.

Notice that he didn’t say that “Republicans are owned by big money.” Sanders believes that ALL of Congress is owned by big money. That’s what he means when he says that the system is rigged. His view is that the gridlock we are witnessing right now is not a result of ideological differences. It is because big money is in charge and that makes Congress oblivious to the needs of the American people.

This explains why Sanders has never formally joined the Democratic Party. And why he hasn’t stumped for many Congressional Democrats – much less help them raise money for their campaigns. It’s why he thinks the only way to change things is via a revolution of the people.

When it comes to this central belief of Sanders, it is not something new for him. Thirty years ago when he was Mayor of Burlington, VT, here’s what he told the LA Times:

I think from one end of this country to the other people are ripe for political revolution. Fifty percent of the people do not bother voting in the presidential and statewide elections. The vast majority of those not voting are low-income people who have given up on America. The whole quality of life in America is based on greed. I believe in the redistribution of wealth in this nation.

We are demonstrating in Burlington the peoples’ contempt for conventional old-fashioned Democratic and Republican politics. The good news here is that the two-party system and corporate establishment are not invincible.

Here is where that creates problems for Sanders (and many of his supporters): if the sole reason for our political disagreements is that our opponent has been bought out by the corporate establishment, it becomes impossible (and unnecessary) to actually discuss those disagreements. Hence, when organizations like Planned Parenthood and the Human Rights Campaign endorse Clinton, they are simply dismissed as part of the rigged establishment (I know Sanders walked that one back a bit. But it is interesting to note his instinctive initial response).

As the primary race heats up, a lot of the back-and-forth between Clinton and Sanders supporters online and on twitter has taken on this tone. For example, when Mike Konczal continues to suggest that it is important to regulate shadow banking (as Clinton proposes to do), he is accused of “echoing the arguments of financial lobbyists.” But he’s probably used to that kind of thing. For someone who hasn’t been in the limelight to that extent, perhaps you’ve heard of Charles Gaba. He made a name for himself by tallying sign-ups for Obamacare and initially started writing about that at Daily Kos before he established his own site. About a week ago he published a diary at Daily Kos titled: On Healthcare, I Have to Side With Hillary. Here’s an example of the kind of the comments he got from Sanders supporters:

Congratulations on your achievement. Evidently that confirms to me that you are a literate shill of the insurance companies…

He is a paid ACA expert and advocate. He’s intimately familiar with its intricacies and gains professionally from detailing them. And now he states he wants that system to continue as is, or maybe get more intricate and expand slowly and profitably? That is not surprising.

Unsurprisingly, people don’t like being told that they are part of a rigged establishment or that they are a shill of the insurance companies – it is pretty much guaranteed to end any reasonable discussion on actual issues. To the extent that charge is thrown at Congressional Democrats, it probably explains why so few of them have endorsed Sanders.

This is unfortunate because it creates divisions rather than coalitions. Of course it is no more true to assume that money plays no role in political differences than it is to say that it is the only reason for them. Life is never that black and white. Developing a real movement for change requires that we actually listen to each other and sometimes make the tough call on who we can work with and who we can’t. It’s hard work. There are no easy outs and sometimes you get burned. But simply assuming that anyone who disagrees with you is bought and paid for is childish and divisive.