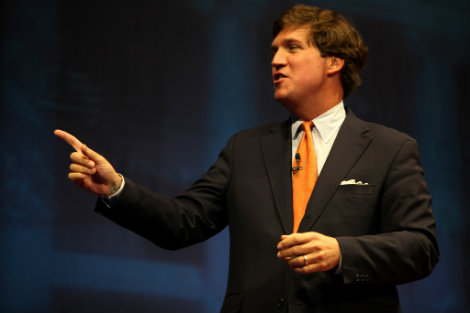 Given his history and how he currently makes a living, people should be forgiven if it makes them impatient to get lectured by Tucker Carlson, but his column on Donald Trump is worth reading even if the messenger doesn’t have any moral standing to deliver the message.

He makes more than a few worthwhile points. For starters, the Democrats should take a recent history lesson from the Republicans and stop dismissing Trump as some kind of gift from God. I don’t care what the head-to-head polls say today. The head-to-head polls looked a lot better for Ted Cruz before Trump started savaging him.

He would be the most aggressive anti-Clinton campaigner we’ve ever seen, and there’s nothing in Bernie Sanders’ history that indicates any proficiency with attack politics. Trump is also pulling from the pool of unlikely voters, many of whom are registered Democrats. There’s enough evidence now–the left should not be as complacent about Trump’s candidacy as the right has been.

As for the Republican Establishment, Carlson points out, correctly, that Trump is succeeding because they have failed. Ultimately, they didn’t know their own voters and they didn’t make sure to look after them.

Conservative voters are being scolded for supporting a candidate they consider conservative because it would be bad for conservatism? And by the way, the people doing the scolding? They’re the ones who’ve been advocating for open borders, and nation-building in countries whose populations hate us, and trade deals that eliminated jobs while enriching their donors, all while implicitly mocking the base for its worries about abortion and gay marriage and the pace of demographic change. Now they’re telling their voters to shut up and obey, and if they don’t, they’re liberal.

This is actually the same critique of the Republican Establishment that progressives have been making for years. One part is a charge of hypocrisy and incompetence, that the GOP doesn’t deliver or really believe in many of its core promises. Another part is a critique that most of these policies aren’t actually good for ordinary working people. So, whatever the overall effects of free trade agreements, for example, the losers are quite clearly folks who work in our formerly industrialized heartland. And, whatever the legitimate seasonal labor needs of the agriculture industry, the folks who are actually facing job and wage competition from undocumented workers tend to be working class folks in industries like construction.

I can see how this is working right here at home. I live in the near-Philadelphia suburbs and our local mall is still virtually full, with a small handful of empty stores. Pretty soon, they’re going to film a Hollywood film there. It has several restaurants and a thriving health center that is part the Main Line Health System.

But if I travel out to Berks County, the malls are almost completely empty. Instead of a Macy’s, they have maybe a used furniture outlet, a comic book store, and an old, tired arcade. You can walk from one end of the mall to the other and see no more than two or three operating businesses. The food court was shut down long ago, and the parking lot is pulling in more revenue than the interior by selling Christmas trees and hosting flea markets.

That’s the story of this thriving economy, and it’s analogous to the disconnect between DC and Red State America that Carlson describes in his piece.

It’s true that this is what Bernie Sanders wants to talk about, but these voters have a shorter walk from where they stood (with George W. Bush) to Donald Trump’s Screw-You-Politics than to Sanders’ Democratic Socialism.

This cohort of America, downscale white working class culturally conservative workers, has been dying out at a rate comparable to the AIDS epidemic at its height. They’re being felled by opioid and alcohol poisoning, mainly, but also by the loss of status and hope. And their Republican masters totally missed this. They proposed nothing to combat it except tribalism, anti-elite resentment, and policies that promise to keep more money in the hands of the coastal elites and heartland oligarchs.

It’s no wonder these people feel betrayed. And the religious among them are feeling the additional sting of losing the culture wars. For them, Trump may be faking his piety but it doesn’t matter.

You read surveys that indicate the majority of Christian conservatives support Trump, and then you see the video: Trump on stage with pastors, looking pained as they pray over him, misidentifying key books in the New Testament, and in general doing a ludicrous imitation of a faithful Christian, the least holy roller ever. You wonder as you watch this: How could they be that dumb? He’s so obviously faking it.

They know that already. I doubt there are many Christian voters who think Trump could recite the Nicene Creed, or even identify it. Evangelicals have given up trying to elect one of their own. What they’re looking for is a bodyguard, someone to shield them from mounting (and real) threats to their freedom of speech and worship. Trump fits that role nicely, better in fact than many church-going Republicans. For eight years, there was a born-again in the White House. How’d that work out for Christians, here and in Iraq?

I’ll give Carlson credit here. He nailed it. This perfectly describes why evangelicals prefer Trump to Mike Huckabee or Ben Carson. They’re like the small business that goes to the Mob to solve their shoplifting problem. The pastor wasn’t going to deal with the thugs, and prayer wasn’t working.

So, this election season is really developing into a story about things coming to a head. We’ve been telling ourselves that we’re structurally doomed to live with red state/blue state gridlock and that the country is divided roughly fifty-fifty.

I don’t think the country is looking for someone who is satisfied with that answer even if it’s accurate. And that’s why Trump is doing so well, and also why Hillary Clinton is going to have a bigger challenge than many people realize.