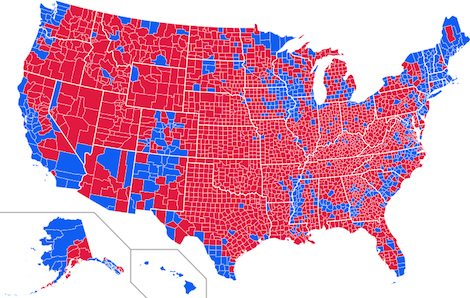 Amidst the welter of polling numbers, demographic statistics, and campaign finance data that the primary season spews forth, it is well for Republicans to bear in mind the two unchanging numbers that really count: the number of Electoral College votes needed for ultimate victory (270), and the number of delegates needed to nominate (1237). The increasingly difficult task for the GOP is to align the two– to come up with convention nominees who can go on to win the election.

Four years ago the Romney-Ryan ticket garnered 206 electoral votes by taking the so-called red states of the Plains and Mountains, the South and its Border plus Alaska and one populous Midwestern state: Indiana. While predictably losing their home states, Romney and Ryan also failed to win the more reliably Republican-leaning states of Virginia, Florida and Ohio. These three states together have 60 Electoral College votes, enough to bring the GOP within four votes of victory. Simple arithmetic suggests that to have a shot at the presidency in 2016 the GOP ticket must hold the Romney-Ryan base and win all three of Virginia, Florida and Ohio, plus one more state.

One can of course play with these numbers at the margin, substituting for Virginia the electoral votes of New Jersey or Colorado plus Nevada and/or Iowa, all of which went Democratic in 2012, or speculating about New Hampshire’s or New Mexico’s return to the GOP, or about the potential defection of Arkansas to Hillary Clinton, its former first lady. But barring some breakthrough in the industrial Midwest there is no plausible scenario for GOP victory in 2016 without both Florida and Ohio.

This is the hard-number reality that fuels the 2016 candidacies of Florida’s Marco Rubio and Jeb Bush and of Ohio’s John Kasich. The primaries in their home states on March 15 will sort out which of them can realistically aspire to a place on the ticket.

Ohio has a special historical status because no Republican has ever been elected president without it. Geographically, it occupies a central position in the swath of populous states from the Middle Atlantic to Illinois. Electorally, it is a regional bellweather to the Midwestern states of Michigan, Wisconsin, Minnesota and Illinois, as well as to neighboring Pennsylvania: if a GOP ticket is not winning Ohio‘s 18 Electoral College votes it is unlikely be competitive for the 76 additional votes of those five states.

Well aware of this, the Republican National Committee chose Cleveland as the party’s 2016 convention site, thus signaling a desire to revivify the GOP’s midwestern roots. Sad to say, this intelligent effort is undercut by the continuing under-representation of the industrial Midwest in the RNC and in the Convention. This is a consequence of GOP structure. Whereas the states of that region are all relatively populous, voting power in National GOP bodies has become increasingly tilted toward the less populous states which dominate the RNC and the convention committees on rules, credentials and platform.

All national GOP committees are structured on a one-state-one-vote basis, in contrast to the Democrats, who also give representation to the congressional districts. In a multi-candidate race there are many convention maneuvers—bringing issues and nominations to the floor, suspending the rules, challenging credentials, requesting a roll-call—that depend on the number of states bringing the motion, not on their delegation size.

Which brings us to the second unchangeable number: 1237, the majority of the 2472 convention delegates needed to nominate. In the past twelve years the delegate allocation formula has fallen out of alignment with the Electoral College standard by which presidents are elected.

The allocation of delegates among the states has two parts—the base, which is fixed and given to all states, and the bonus, which varies for each state depending on success in the most recent elections. Each now tilts the convention away from a winning coalition.

From 1856 to 2000 the base was non-problematical. It was a simple multiple of the Electoral College vote. From 1860 to 1968 the multiple was two. To take the simplest example, Wyoming, with three electoral votes, had a convention base in 1968 of six delegates (two for each congressional district plus four at-large). In response to demands for a larger convention the multiple was raised to three for the 1972 convention giving Wyoming a base of nine delegates, while the base of a large state like California was raised in the same proportion, by half.

But for 2004 a new allocation rule was adopted raising the base number of at-large delegates from six to ten (five for each senator) without a proportionate increase in congressional district delegates. In addition, the three RNC members from each state and territory were given the status of super delegates, breaking a tradition that prohibited ex officio privilege. In total, the at-large component of the fixed base for each state was increased from six to 13, while the congressional district allocation remained frozen at three. The Wyoming base thus rose to 16– three for its one congressional district, ten for its two senators, and three for its RNC members.

This precedent-breaking structure was reaffirmed in the rules adopted at the 2008 and 2012 conventions, notwithstanding protests of principled conservatives that the new system violated the “Madisonian balance” enshrined in the Constitution (and thence in the calculus for electoral success). It would now require more than a 1500 new congressional district delegates to re-align the base of the convention with the Electoral College.

Super-added to the fixed base, a variable bonus system rewards GOP victories in the most recent presidential, gubernatorial, senatorial, congressional and statehouse elections. Bonus delegates are projected by Green Papers at 439, 18% of the Cleveland convention. Here, too, there is a tilt away from states rich in electoral votes. All but one of the bonus devices employed are “uniform”—that is, they are meted out to states equally regardless of population or GOP turnout.

For example, the congressional bonus is awarded not for the number of victorious congressmen, but for control of a state’s House delegation, so that Wyoming with one congressional seat receives one bonus delegate, the same as Texas with 25 GOP members of the House. The only non-uniform device is a presidential victory bonus awarding delegates equal to 60% of a state’s electoral vote if it carried for the ticket in the preceding election. Yet even this is yoked to a uniform bonus of 4.5 delegates that, with rounding of fractions, skews it inexorably toward the small states.

The main lines of the current bonus system were advanced in the 1970s by supporters of Ronald Reagan to entrench a permanent convention majority, anchored in the South and West, which would also represent an “Electoral College lock” on the presidency. The lynchpin of their calculus was a solidly Republican California, which at that time had the only winner-take-all primary in the nomination process. The 1970s numbers made a California-led convention and electoral lock eminently plausible.

But with California now voting Democratic the structural logic of the GOP convention tends more toward an Electoral College lockout, with a self-entrenching majority of the convention representing a minority of the Electoral College vote. This self-defeating consequence, always latent in the bonus system, has not yet been fully actualized. But the current numbers do come close:

Not surprisingly, long-standing proposals to rebalance the convention by rewarding GOP voter turnout or introducing congressional representation into the RNC have died in rules committees grounded in a one-state, one-vote principle.

Democratic Party structure poses its own problems, so the dysfunctions of the GOP need not be fatal. It is not, in any case, systemic structures but thinking delegates and voters who nominate and elect a president. And of course this year’s multi-candidate field brings many split delegations and non-quantifiable passions into play. Still, there is no escaping the long-term regional and demographic implications of GOP structure.

As it happens, the eleven most populous states have exactly 270 electoral votes, the magic number for victory. Yet they will have only 40% of the delegates at the 2016 Cleveland convention and 20% on convention committees (the threshold for taking minority views from committee to the floor is 25%). On convention committees on rules, platform and credentials (as on the RNC) the four territories– Guam, American Samoa, the Virgin Islands and the Marianas– will have the same voting power as California, Texas, Florida and New York, the four most populous states.

Of the top eleven states only two—Texas and Georgia— with 54 electoral votes have gone Republican in all of the past three elections, as compared with six, having 154 electoral votes, that have voted Democratic.

Demographically, because the large states have been the main gateways for new immigrants, as well as migrants from the rural South, the small-state bias has tended to retard assimilation into the National GOP. Republicans have been well aware of their “outreach” problem: beginning in 1976 GOP rules committees conferred non-voting RNC seats on minority auxiliaries reserved for blacks, Hispanics, “Jewish-Americans” and “Heritage Groups” (Asian, Southern and Eastern European). Persuaded that such token seats were ineffectual and even offensive, the party dropped them in 2000.

Since that time, the RNC has elected on individual merits several chairmen from the constituencies previously consigned to token seats, and Republicans in many states have supported leaders with backgrounds that would have seemed exotic to bygone generations. But as we have seen, GOP rule-makers have ignored the simple device of providing constitutionally grounded representation to the states and congressional districts where most “outreach” voters live.

Some would argue that in an age of high advertising budgets and media dominance, party structure does not matter. The rules of a party, they may concede, do reflect and entrench its political culture, but they view this as peripheral to the presidential drama unfolding in the 24-hour news cycle. Besides, they might say, institutional structures, unseen and unchanging from day to day, are boring.

In the last analysis, however, it is the delegates who nominate the presidential ticket; it is the convention committees which will certify those delegates, shape the public face of the party and set the ground rules for the 2020 convention. And it is the Electoral College that decides on the president. This may be one of those years when the effects of fundamental rules, always exercising influence in the background, are made visible.

The challenge for Republicans, especially those in the less populous states, will be to recognize the distortions of their own structure and to focus on achieving a synergy between that 1237 convention number and the final 270 electoral votes needed to put a Republican in the White House in 2016 and the years beyond.

It will not be easy.

Josiah Lee Auspitz has written and testified on party rules over the course of forty years. His “A Short History of Republican Bonuses” appeared as an appendix to a longer article on “Party Rules” in The 1984 Election and the Future of American Politics, edited by Peter W. Schramm and Dennis J. Mahoney, (Carolina Academic Press and the Claremont Institute for the Study of Statesmanship and Political Philosophy, 1987), pp. 133-181.