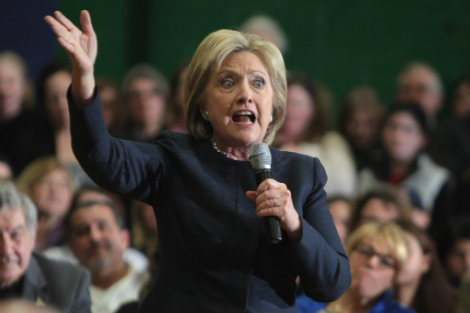 Since he already used it, it’s not possible to adopt Barack Obama’s “Sí, se puede” motto, but Hillary Clinton is coming dangerously close to running a “no, no podemos” campaign. Whether it’s realistic or not, Bernie Sanders is saying “yes, we can” get a single-payer health care system, “yes, we can” get universal pre-K and free college tuition at our state universities, “yes, we can” achieve guaranteed sick leave and vacation for every employee, “yes, we can” raise the minimum wage to fifteen bucks an hour, “yes, we can” break up the big banks, “yes, we can” reform our corrupt campaign finance system, and “yes, we can” make the super-wealthy pay for these things.

To her credit, Hillary Clinton has been mostly trying to focus on what she, too, can accomplish. But she and her surrogates are also working hard to pour cold water on Sanders’ proposals. We’re told that the Republicans will control at least one house of Congress next year, and they’ll never vote for anything Sanders is proposing. We’re told that single-payer is a nice idea but it would be too disruptive and politically toxic to be fair or viable as a policy goal. We’re told that some people should pay for college, either because their parents can afford it or because it builds character. We’re told that breaking up the big banks isn’t a worthy goal and that it’s not the best way to address systemic risk. We’re told that $15 is too much and we should settle for a $12 minimum wage.

All of Clinton’s positions here are highly defensible, and running for president ought not to be an exercise in who can make the biggest proposals or promise the most unachievable goals. Policies should make sense, not just sound good. And candidates shouldn’t lay out a vision for a White House agenda that’s completely dead on arrival. But, if Clinton doesn’t watch out, people are going to start taunting her with “No, we can’t” chants and placards and internet memes.

It’s admittedly a difficult thing to explain to people why they can’t have the things they want. It’s even harder to explain why, in some cases, they shouldn’t even want those things. Every parent understands this.

But if Sanders overtakes Clinton with the Democratic electorate, it will be because he’s not willing to settle for pushing a political program calibrated to work in our dysfunctional, gridlocked Congress. Every time people tell his supporters that we can’t accomplish these things, they come back and say “Yes, We Can!”

Overall, I think Clinton is performing at a very high level as a candidate. She debates well. She did great when she testified at the Benghazi! Committee. She interviews well. She has a pretty good stump speech. She’s assembled a much better campaign staff than she had eight years ago. Her proposals are mostly within the realm of the possible.

She’s not failing as a candidate. But she has to find a way to talk sense without coming off as a party pooper who thinks the goal here is to function within the status quo.

The status quo is unacceptable, and that’s the one thing everyone seems to agree about in this country. She needs a message better calibrated to meet the times or she risks actually losing this nomination.