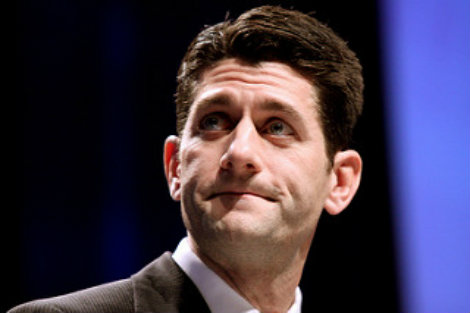 If you ask Paul Ryan, he’ll tell you that their latest failed attempt to repeal the Affordable Care Act (and defund Planned Parenthood) wasn’t futile at all, but a highly meaningful message to voters that they’ll achieve those goals next year if only the electorate gives them a President Trump or Cruz or Rubio.

Republicans failed in their latest futile attempt Tuesday to kill President Barack Obama’s health care overhaul, a Groundhog Day vote by the House that was solely an exercise in election-year political messaging.

Tuesday’s near party-line vote to override Obama’s January veto of legislation gutting much of the law was 241-186, but that fell short of the two-thirds majority needed to reverse a veto. House Speaker Paul Ryan said the effort to force enactment of the bill, which would have also ended federal payments to Planned Parenthood, would send an important signal.

“What we’re proving today is if we have a Republican president next year, we will repeal Obamacare,” Ryan, R-Wis., told reporters, using a nickname for a law that GOP lawmakers have despised since it was pushed through Congress six years ago.

Ryan said the GOP will offer its own proposal this year for replacing the law, saying it would lower costs and “restore the doctor-patient relationship.” Republicans have struggled unsuccessfully for years to coalesce behind a replacement plan.

If you believe that the GOP will offer a proposal for replacing Obamacare later this year, I have a Trump casino to sell you.

I also don’t think it’s popular to take away health insurance from over sixteen million people. I know that defunding Planned Parenthood is unpopular.

So, really, this messaging isn’t helpful to the Republicans.

But, considering that Cruz and Rubio are in the top tier of Republican candidates for the presidency, and that both of them want to ban abortion with no exceptions for health, rape, or incest, I guess the GOP just doesn’t care about what’s popular or helpful.