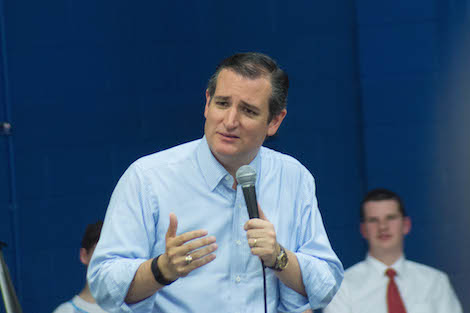 At the outset, let me say that in a field of Republican presidential candidates that is disturbing, Ted Cruz is perhaps the worst. There is a reason why no one who knows him or works with him has anything but contempt for the guy. His policy positions are downright dangerous and he is steeped in ideological authoritarianism.

The one thing Cruz has going for him is his intelligence. And that is what makes him rise above the rest in terms of the threat he poses. We saw the results of that with, not only his win in Iowa, but the way he won. Those who are simply writing it off to the high concentration of evangelical conservatives in Iowa are failing to look at the bigger picture.

Back in October I wrote that “Dubya is right to worry about Cruz.” Let’s review some of why I said that.

One way to judge a candidate’s performance is in the amount of money his campaign is raising – especially from small donors. As I noted a couple of days ago, right now Ted Cruz is leading the field on that one with the most cash on hand and 42% of his contributions coming from people who gave $200 or less.

Yesterday the editorial board of the Des Moines Register noted that Cruz won Iowa the old-fashioned way.

As Monday night’s caucus results showed, Cruz’s strategy, which included at least one visit to each of Iowa’s 99 counties, paid off. He slogged his way across Iowa by car and by bus, stopping in small-town cafes and gymnasiums, while his biggest threat, Donald Trump, traveled by personal jet and by helicopter to large-scale rallies.

The victory was all the more significant given the gains Trump had made in the final Iowa polls leading up to the caucus.

This is how presidential campaigns tend to work in Iowa. They are grounded in hundreds of small, intimate gatherings in which a few dozen people get some actual one-on-one face time with the candidates.

You might respond by saying, “that’s Iowa, but it’s not how it will work going forward.” You’d be right. But it demonstrates that Cruz figured out how to win in Iowa. And as Nick Corasaniti noted months ago:

For every county in the first four voting states of Iowa, New Hampshire, South Carolina and Nevada, the Cruz campaign has locked down county chairs in charge of not just lending their names to the campaign, but of spearheading outreach and organizing efforts…

The focus on the ground game should come as no surprise, as the Cruz campaign has been heavily focused on building leadership teams…It has also focused on building issue-based teams in the early states, such as their “99 Iowa Pastors” initiative, which seeks to tap into the networks to build more grass-roots support.

I suspect that Cruz won’t pull off any surprises in New Hampshire. The focus there is likely to be on which “establishment candidate” has the best showing. Cruz is focusing on what comes after that and before the big splash on Super Tuesday.

Cruz also has a plan beyond Iowa. He has referred to the March 1 “SEC primary,” in which eight Southern states go to the polls, as his “firewall”: that is, a backstop against whatever losses he might sustain beforehand. This year, these Southern states will go to the polls before Florida and before the traditional Super Tuesday, a change in the primary calendar instituted by RNC chairman Reince Priebus. Most of those contests, unlike the ones that precede them, are not winner-take-all, and Cruz’s goal is to win the most delegates rather than to take entire states.

All of this is, of course, balanced by the fact that Cruz is despised among a lot of Republicans (not to mention Democrats). But he’s got a game plan and is executing it pretty well so far.