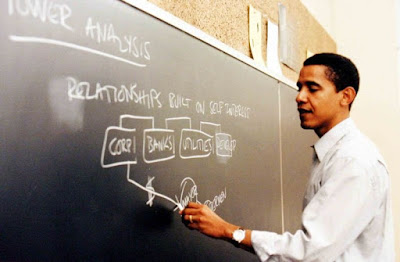 A lot has been written over the last few years about how a Black guy named Barack Hussein Obama got elected President of the United States of America…twice. But one of the things that is rarely mentioned is that he took his background as an African American man, his experience as a community organizer and his years of studying law at Harvard, and used it to develop an understanding of how to gain and wield power. In the photo above, he is teaching a class on that topic in Chicago prior to his run for the presidency.

This is one of the things that most intrigued me about the President from the beginning. By watching what he has said and done over the years, it has become clear to me that he understands the power of partnership…a kind of “power with” as opposed to the “power over” of dominance. 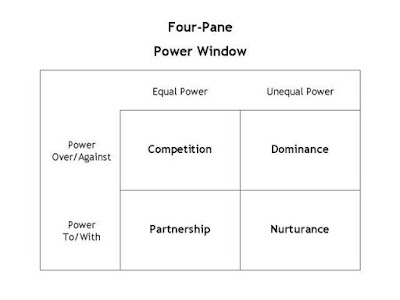 That seems to be something that Bernie Sanders understands as well. 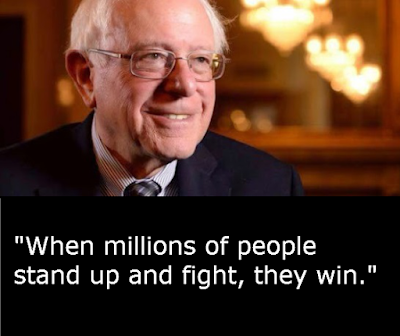 But lately, both Sanders and his campaign have been engaging in rhetoric that is divisive. That erupted again a few days ago when Sanders suggested that Clinton was only a progressive on “some days.” When the Clinton camp responded, he eventually tweeted this:

Sanders’ supporters loved it, saying things like, “he’s Bernin’ it up on twitter” and “Boom. Nailed it!” I know how good it feels when your candidate lands a blow on their opponent. It’s also a great demonstration of power if you assume you are involved in a competition (see four-pane power window above).

But engaging in that kind of power play is self-defeating when you are trying to build partnerships (much less start a revolution). That’s exactly what Brian Beutler noticed.

Even if you side with Team Sanders on this question, the insight that gave rise to that tweet (that pitting progressives against moderates is an effective tactic in a two-person Democratic primary) is incompatible with the goal of uniting the existing Democratic base with the unattached voters and Republicans of the white working class. It may even be incompatible with building a majority coalition in a general election.

Others, like Amanda Marcotte and Connie Schultz weighed in as well.

I am reminded of the seminal speech on building coalitions (i.e., partnerships) by Bernice Johnson Reagon. In it, she said this:

There is an offensive movement that started in this country in the 60’s that is continuing. The reason we are stumbling is that we are at the point where in order to take the next step we’ve got to do it with some folk we don’t care too much about. And we got to vomit over that for a little while. We must just keep going.

In order to wield the power of partnership with any hope of igniting a revolution, that is what is required…like it or not.