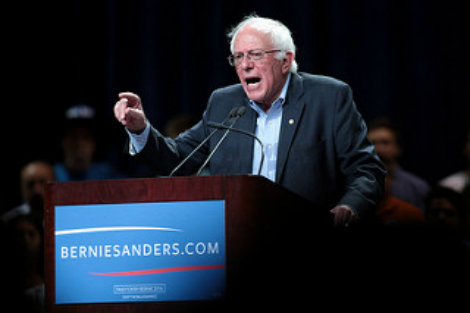 Much of the conversation about the Democratic presidential primary between Bernie Sanders and Hillary Clinton has focused on their different theories of change: idealist vs pragmatist. But recently I’ve been hearing about another way to capture the differences. It draws on the distinctions of Archilochus’s classic essay about the hedgehog and the fox, which can be summarized this way: “a fox knows many things, but a hedgehog one important thing.” The latest commenter to use this frame is David Graham because it pretty effectively captures what happened in last nights debate.

With the New Hampshire primaries just days away, Democrats Hillary Clinton and Bernie Sanders met on a debate stage in Durham on Thursday. In their first one-on-one matchup, the duo seemed determined to illustrate Archilochus’s classic binary between the fox, who knows many things, and the hedgehog, who knows one important thing. Sanders knows that what the country needs—the only thing it needs—is a political and economic revolution. Clinton knows the country needs progressive policies on a range of matters and a pragmatic, realistic strategy to implement them.

During the first half of the debate, the focus was on domestic issues – mainly the role that money plays in our politics and the two candidate’s approach to Wall Street reforms. Here is an example of Clinton being the fox:

I want to go after the pharmaceutical companies like Valeant, and Turns that are increasing prices without any regard to the impact on people’s health. Now, if all we’re going to talk about is one part of our economy, and indeed one street in our economy, we’re missing the big oil companies. We’re missing other big energy companies. We’re missing the big picture, and I have a record of trying to go at the problems that actually exist, and I will continue to do that.

And here is Sanders’ response:

Yeah, I do. I agree with much of what the Secretary said, but, madam Secretary, it is not one street. Wall Street is an entity of unbelievable economic and political power. That’s a fact.

And, I want to say something, and it may sound harsh, not to you, but to the American people. In a sense, in my view, the business model of Wall Street is fraud. It’s fraud. I believe that corruption is rampant, and the fact that major bank after major bank has reached multi billion dollar settlements with the United States government when we have a weak regulator system tells me that not only did we have to bail them out once, if we don’t start breaking them up, we’re going to have to bail them out again, and I do not want to see that happen…

The same dynamic was visible in the second half of the debate that focused on foreign policy. Sanders continued to focus on Clinton’s error in judgement when voting for George Bush’s 2002 AUMF in Iraq while she dove into the complexities that we face around the globe.

Each approach – the hedgehog and the fox – has its strengths. In a world of campaign soundbites, the hedgehog provides clarity of vision. That is especially true for voters who have focused their attention on their anger at “the one important thing.” On the other hand, being President of the United States as well as Commander-in-Chief requires knowledge of complex issues and the ability to craft meaningful responses. Another analogy would be to compare the candidate’s poetry of campaigning vs prose of governing. As such, the hedgehog and fox binary offers each candidate a validation of their strengths and a window into where they can improve.