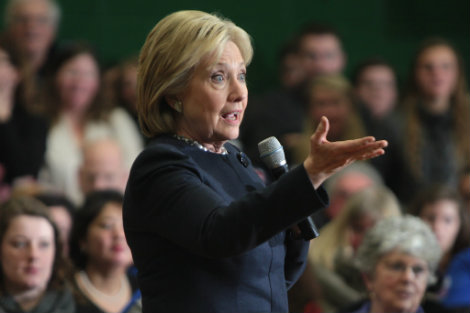 I’m trying to do my best to avoid spin and talking points when analyzing the battle between Hillary Clinton and Bernie Sanders, and I’m aware that a lot depends on the eyes of the beholder. Having said that, I believe Bernie Sanders decisively won the debate last night despite doing poorly during the foreign policy segment.

And it’s more than just last night’s debate. Over the last couple of weeks, Sanders has begun winning this race.

Clinton’s “victory” in Iowa has turned out to be pyrrhic. First, she underperformed expectations, while Sanders exceeded expectations. Second, the entrance polls showed that Sanders is crushing Clinton among people under forty-five, especially among women. This bolstered his case that he’s the forward-looking candidate with the potential to excite the base and boost turnout, and it badly undermined Clinton’s case that she’ll rally women to her side. Third, the caucus process was so messy that even the Des Moines Register is calling shenanigans, questioning the legitimacy of the result, calling for an audit, and sharply criticizing the Clinton-aligned chairwoman of the Iowa Democratic Party for denying that audit. In these circumstances, it would have been better to lose.

Sanders came out of Iowa energized and with all the momentum.. And it showed in the debate last night. The first hour was a near-total debacle for Clinton.

It began when she fell into the trap I warned her about of coming across as the “No, We Can’t” candidate.

I’m not sure why the Clinton campaign wants to fight over who’s a progressive. The progressive movement pretty much defines itself as being in opposition to the politics of the Democratic Leadership Council and, to a significant degree, 1990’s-style Clintonism. What she needs to do to appeal to progressives is not to insist that she is and always has been one of them. That just elicits incredulous guffaws of outrage. What she needs to do is show that she’s not a clone of her husband, and never was. And, to state what should be obvious, no one who doesn’t consider themselves a progressive is going to care if Clinton considers herself a progressive. The only people who care about this debate are the progressives who, overwhelmingly, agree that Sanders is progressive and Clinton is not.

Even more head scratching is her attempt to claim that she isn’t part of the Establishment. She’s the former First Lady, a former senator from New York, and a former Secretary of State. She’s worth millions, and she and Bill run the Clinton Global Initiative that deals with the Establishment of countries all across the world. Saying that she’s not the Establishment is ridiculous on its face. Imagine if Eleanor Roosevelt, while serving as Ambassador to the United Nations, had attempted to argue that she was a political outsider!

And that’s before we add in that she can walk into the Conrad Hotel in Lower Manhattan to talk to Goldman Sachs executives and walk out a couple of hours later with a check worth more than her opponent’s total net worth.

Here’s how that went last night when Rachel Maddow questioned Sanders about why prominent political figures in Vermont who knew him best were endorsing Clinton. Bernie responded, in part, by pointing out “So, Rachel, yes, Secretary Clinton does represent the establishment. I represent, I hope, ordinary Americans, and by the way, who are not all that enamored with the establishment…”

This irritated Clinton, who responded nonsensically:

CLINTON: Well, look, I’ve got to just jump in here because, honestly, Senator Sanders is the only person who I think would characterize me, a woman running to be the first woman president, as exemplifying the establishment. And I’ve got to tell you that it is… (APPLAUSE)

CLINTON: It is really quite amusing to me.

I suppose this makes sense in a distorted kind of way, in that the head of the Establishment (the president of the United States) has always been a man. But this is just such a stretch that most people find it to be the worst kind of spin. Hillary Clinton and Jeb Bush are the most Establishment candidates in this race, everyone knows it, and she should stop trying to convince anyone otherwise.

So, having dedicated significant effort to implausibly arguing that she’s a progressive and an anti-establishment candidate, she then got to the meat of why these things are supposed to matter.

That she was going to go here was telegraphed earlier in the day when both Greg Sargent and Kevin Drum went after Sanders for insinuating, without making the accusation outright, that Clinton’s paid speeches to Wall Street have a corrupting effect on her. The point was that this was negative campaigning and underhanded. If Sanders wants to suggest that Clinton is beholden to the Big Banks and investment firms, he should come right out and make that charge.

Obviously, the Clinton team read those pieces and thought they opened a promising avenue for rebuttal. I am going to quote Clinton from last night’s debate at length here because she got booed at the end.

CLINTON: Yeah, but I — I think it’s fair to really ask what’s behind that comment. You know, Senator Sanders has said he wants to run a positive campaign. I’ve tried to keep my disagreements over issues, as it should be.

But time and time again, by innuendo, by insinuation, there is this attack that he is putting forth, which really comes down to — you know, anybody who ever took donations or speaking fees from any interest group has to be bought.

And I just absolutely reject that, Senator. And I really don’t think these kinds of attacks by insinuation are worthy of you. And enough is enough. If you’ve got something to say, say it directly.

But you will not find that I ever changed a view or a vote because of any donation that I ever received.

CLINTON: And I have stood up and I have represented my constituents to the best of my abilities, and I’m very proud of that.

CLINTON: So I think it’s time to end the very artful smear that you and your campaign have been carrying out…

Needless to say, getting booed isn’t what she was going for. But, far worse, after she landed her little jab, Sanders landed a roundhouse counterpunch.

Well, some people might think, yeah, that had some influence.

Sanders went on to spell out other ways in which our politics are distorted by big corporate donations, including the price of prescription drugs, and the Republicans’ refusal to accept the science of climate change. And his point was obvious. Corporate giving distorts our politics and gets results. They don’t hand out checks worth hundreds of thousands of dollars for brief speeches for the fun of it.

Clinton continued to bleed on this issue when Chuck Todd asked her if she’d release the transcripts of her private corporate speeches and she was reduced to saying she’d “look into it.” Of course, if Politico’s reporting is correct, there’s absolutely no way she wants to release the Goldman Sachs transcript.

On a recent afternoon, executives at Goldman Sachs invited a few hundred major investors to the Conrad Hotel in lower Manhattan. The bankers and their guests filed into a large room and turned their eyes to Hillary Clinton…

…Clinton offered a message that the collected plutocrats found reassuring, according to accounts offered by several attendees, declaring that the banker-bashing so popular within both political parties was unproductive and indeed foolish…

Certainly, Clinton offered the money men—and, yes, they are mostly men—at Goldman’s HQ a bit of a morale boost. “It was like, ‘Here’s someone who doesn’t want to vilify us but wants to get business back in the game,’” said an attendee. “Like, maybe here’s someone who can lead us out of the wilderness.”

This was all devastating enough, but when they got to policy, she had the distinct disadvantage of having to argue that we can’t have a health care system as good as Canada’s and we can’t afford to give people free tuition to college like we give them free tuition to K-12 education, and that we can’t raise the minimum wage as much as her opponent would like. This is probably the most frustrating part of this campaign, because on the merits Clinton is much more on the level than Sanders. It’s easy to offer pie in the sky proposals that are popular with the base, but it’s a cheap way of politicking and it presents problems later on when you can’t even come close to keeping your promises. She deserves credit for her refusal to engage in a pandering arms war.

The problem is that she is thereby pushed into being a naysayer who can’t speak to the aspirations of the base. Her incrementalism is probably well-suited to actually occupying the White House in a time of Republican dominance in Congress and in the states. But it’s a wet blanket on the campaign trail.

Sanders is arguing that the reason all these things are impossible is because politicians take checks from Wall Street. Clinton is arguing that she’s just being honest about what a Democratic president can actually deliver.

The latest Quinnipiac poll shows that Clinton has almost completely lost her national lead since Iowa. It’s easy to see why.