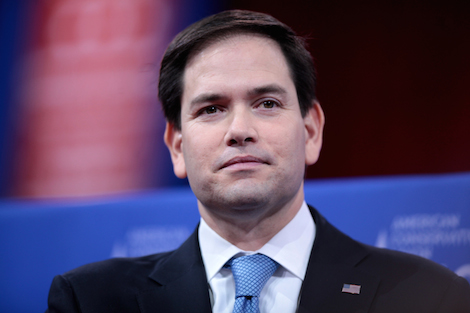 I’m not one of those people who thinks that a single event changes the trajectory of a campaign. For example, I don’t think that Trump’s second place finish in Iowa was because he skipped a debate. Voters don’t tend to pivot away from their candidate that easily.

But Sen. Marco Rubio’s performance in Saturdays Republican presidential debate might be the exception to that rule.

The reason this one event might spell disaster for Rubio is that it confirms every negative assumption people already have about him. First and foremost is the one about how he comes off as a computer algorithm. Here’s what NH reporter Erik Eisele wrote about him.

We had roughly 20 minutes with him on Monday, and in that time he talked about ISIS, the economy, his political record and his background. But it was like watching a computer algorithm designed to cover talking points. He said a lot, but at the same time said nothing. It was like someone wound him up, pointed him towards the doors and pushed play. If there was a human side to senator, a soul, it didn’t come across through.

That kind of analysis feeds on the concerns many voters have about the fact that Rubio is so young and inexperienced. That was recently reinforced by Santorum’s inability to name anything Rubio has accomplished in the Senate. The narrative it confirms is that he is programmed on the surface because there is no substance underneath.

At a time when a portion of Republicans are still trying to make up their minds about which “establishment” candidate to go with, his supporters are not likely to get defensive about this kind of narrative but might, instead, begin to look elsewhere. I doubt it will be enough to exclude him from the race, but this could be a game-changer – especially in New Hampshire tomorrow.