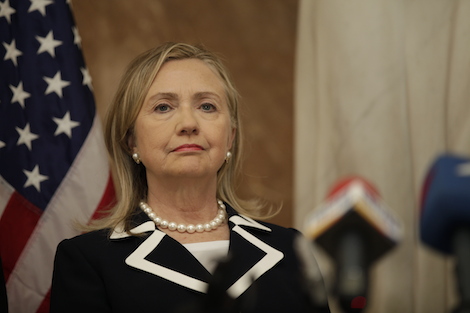 There’s one thing that has really been sticking in my craw. I keep hearing, with plenty of justification, that Bernie Sanders is not going to be able to implement any of his proposals because he won’t find a Congress in Washington, DC that is willing to vote for them. This is almost definitely true. At best, Sanders might be able to find a sympathetic Congress in a second term if post-2020 census redistricting goes really well for the left. But, given how reluctant the Republicans have been to negotiate with Obama and their antipathy for Hillary Clinton, she won’t be able to get much of what she’s proposing enacted, either.

You can make a halfway decent argument that she stands a better chance than Sanders. For one thing, she’d get less resistance from her own party. For another, her proposals are less ambitious. But this strikes me as arguing over the relative chances of the Philadelphia Phillies and San Diego Padres winning the next World Series. If nothing changes, legislative activity in Congress will stay largely reduced to naming post offices and congratulating sports teams for winning sporting events.

That’s why I am very sympathetic to what Matt Yglesias is saying here:

…mainstream Democrats have no real plan to win Congress or state offices, so in terms of big schemes for change (Clinton vs. Sanders is) a choice between two different flavors of wishful thinking, not between realism and impracticality.

I’m not saying that I’m in any way sold on Sanders’s theory of revolutionary change. But it’s an argument. He’s telling us what needs to happen in order for him not only to be elected but to be able to accomplish anything meaningful when he’s in office.

Clinton is not even acknowledging that gridlock is an unacceptable problem.

Now, if you ask experts or even lowly bloggers like me, we’ll tell you all the reasons why it’s almost impossible for the Democrats to win back control of the House of Representatives. If the Dems can get control of enough governors’ mansions and state legislatures over the next four years, they may be able to redraw the congressional lines in a way that makes it possible to win control, but that’s a long way off. Therefore, it’s just more realistic to assume that the next president will be dealing with a Congress that is controlled at least partially by Republicans. Hillary Clinton seems to be acknowledging this unpleasant reality and there is something admirable about leveling with the American people and not making a bunch of promises that you don’t believe you’ll be able to keep.

But, if the Democrats must accept this is the best they can do, they are actually freed of any need to differentiate between what Clinton and Sanders can accomplish. Neither of them will be able to do almost anything legislatively they say that they want to do, so the decision shouldn’t be made on the basis of who is being more practical. In fact, this situation favors the more ideologically committed candidate because most of their impact will be made at their discretion through executive actions.

More than anything, though, Clinton’s best argument is that she can get stuff done and that Bernie cannot. But, without a theory for how to win back the House, she’s undermining her best argument.

If the Clintons really do retool their campaign after New Hampshire, they should focus on creating a “real plan to win Congress or state offices” so the central rationale for her candidacy isn’t so easily dismissed as “a different flavor of wishful thinking.”

This plan doesn’t necessarily have to be more plausible than Sanders’s plan. It would be good, though, if it could at least stand the sniff test.