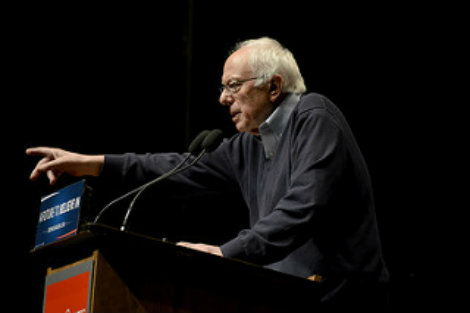 As of right now, with 92% of the vote reporting, Bernie Sanders is projected to have won 13 delegates from New Hampshire. Hillary Clinton is projected to have won nine. There are still two delegates left to be allocated. This is good and bad news for Sanders. It’s good that he won so decisively that he actually netted four convention votes. It’s also good because it demonstrates that he can do as poorly as Clinton (currently 38.3%) in future states and still get 41% of the delegates.

But, by the same logic, this is devastating news for Sanders. Even winning 60% of the vote, he barely scratched the surface of Clinton’s lead, which thanks to superdelegates currently stands at 394-42. The same proportional rules that make it impossible for Clinton to put Sanders away also make it nearly impossible for Sanders to overcome a 350 delegate deficit.

I’ve seen some Sanders supporters suggesting that the superdelegates will flip if they see that Bernie is the choice of the voters. They cite Barack Obama as an example of this. I hate to tell you, but it won’t be so easy this time around. Obama had the backing of Tom Daschle, who had recently been the most powerful Democrat in Washington DC. Obama was supported, early, by senators and governors from the Plains States and Mountain West where the minority populations are low and the Clintons remained unpopular. And Obama won the support of the black community which had been initially skeptical about his chances. Finally, Obama had support from the donor class, Silicon Valley, Wall Street, and many philanthropists. If the superdelegates had denied him the nomination, a lot of very powerful people would have been upset, and the Democrats’ most loyal voting base would have been beyond irate. It was never going to happen.

It could definitely happen to Sanders, though. He wasn’t even a Democrat until six minutes ago. He obviously angers the big donors. He has no coalition of support in Congress, nor the support of anyone as powerful as Daschle was in 2007-8. There are no governors supporting him. Even mayors like Boston’s Marty Walsh and New York’s Bill de Blasio, who might be expected to support a progressive candidate, are not in Sanders’ camp. Add to this that a lot of Democrats are skittish about Sanders’ identity, his age, his region, his religious profile, his embrace of “socialism,” and his positions on foreign policy including Iran, and you’re not likely to see a stampede of Democratic insiders rallying to his cause. In fact, they probably see this as an example of why superdelegates were created in the first place. If the voters want to commit political suicide, the party leaders can step in and restore reason.

That’s the idea, anyway, and Sanders should not expect to see more than a handful of defections from Clinton even if he starts reeling off big victory after big victory.

That’s not to say that he couldn’t whittle down the lead a bit, but he’s still effectively blocked from winning this nomination barring Clinton collapsing through scandal, legal problems, or really poor performance on the campaign trail. In the latter scenario, the pressure of losing primary after primary might cause the Clinton Camp to lash out in ways that do them real damage with core constituencies.

But short of one of these unlikely scenarios, she’s still the heavy favorite to win the nomination even if she loses a lot more than she wins.

And, so far, I’ve only been contemplating worst case scenarios for her. But there’s no reason to assume that she’ll lose all of her commanding polling advantage in future states. 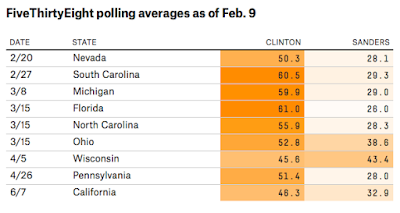 I expect Sanders to get a lot of momentum out of Iowa and New Hampshire, and there will be plenty of Clinton-in-disarray stories, but those are some pretty big numbers for Clinton. She has (or had) a pretty big cushion.

It’s really inspiring to see all these young adults really getting into politics and behind the Sanders campaign, and I’m kind of bummed that they are most likely going to get a pretty demoralizing lesson in the nuts and bolts of insider power. I just hope they don’t get alienated by the process and give up on future participation.

I also hope that if Clinton prevails, as I still expect, that she does it outright and not by depending on superdelegates. If she wins that way, she’ll probably have to put Sanders on her ticket to have any hope of bringing the party together for the general.