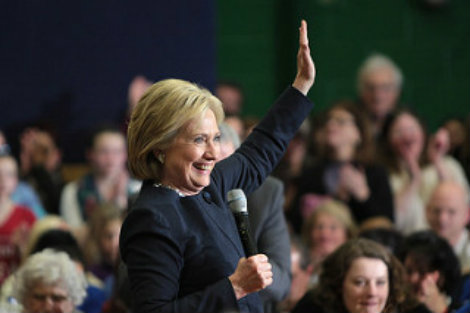 Before the Democratic presidential race gets to South Carolina, the Nevada caucuses will take place on February 20th. Recently I pointed to an excellent article by Tierney Sneed about the challenges both campaigns will face there.

But there is a bit of a dustup going on about these upcoming caucuses that centers around something the Clinton campaign has been saying. Here is how Josh Bresnahan tweeted what he heard from Robby Mook:

/4 Mook: “There’s a sizable Hispanic population in Nevada, but about 80% of Dem caucus voters in that state are white.” That helps Sanders

And how important is Nevada, MSNBC’s Chuck Todd asked.

“Nevada is an important state. So is South Carolina, which comes after that.”

There’s going to be a narrowing in both places — we’re clear-eyed about that,” said Fallon. “There’s an important Hispanic element to the Democratic caucus in Nevada. But it’s still a state that is 80% white voters. You have a caucus-style format, and he’ll have the momentum coming out of New Hampshire presumably, so there’s a lot of reasons he should do well.

“There’s a reason to believe the race will tighten even there,” he said again.

The reason this is causing a stir is that, according to 2008 Nevada exit polls, about 65% of Democratic caucus-goers were white. So I’m not sure where the 80% came from. But technically speaking, the designation “Hispanic” refers to language of country of origin and can represent those who are either White or Black. If that is the distinction the Clinton campaign is making, its probably too cute by half.

But on the bigger picture, color me not surprised that the Clinton campaign is trying to down-play the expectations game in Nevada. No one really knows what’s going to happen there (polling is close to useless) and so the best both candidates might hope for at this point is to out-pace the expectations game.

Another note to keep in mind about Nevada. This is where Clinton’s campaign manager made his name in 2008.

The 36-year-old [Robby] Mook first rose to fame in Clintonland after he oversaw Clinton’s 2008 Nevada caucus campaign, where she won 51 percent of the popular vote…After glowing reviews of his Nevada performance, Mook was entrusted with managing Clinton’s efforts in other important territories: Ohio, Indiana, and Puerto Rico—all of which she went on to win. “Robby was instrumental in her winning them,” one member of the 2008 Clinton campaign’s leadership told me last spring when Mook took the job atop Clinton’s 2016 nationwide campaign…

This time around, Mook has infused the entire Clinton campaign with that organizer’s spirit and stocked it with his old aides, self-proclaimed members of the “Mook Mafia” that formed in Nevada in 2008.

We’ll have to wait and see what the “Mook Mafia” can pull of in Nevada this year.