* It’s good to see this kind of thing. And I expect we’ll see more of it as this campaign goes on.

Two dozen Latino celebrities came together Thursday to implore voters to reject Marco Rubio, Jeb Bush and other top Republican presidential candidates who they say have turned their backs on the Latino community and “embraced the party of Trump.”

In “an open letter to the Latino community” published online, Carlos Santana, George Lopez, Zoe Saldana and other prominent Latino celebrities and activists say Donald Trump’s GOP rivals have not done enough to distance themselves from the Republican front-runner’s anti-immigrant rhetoric.

“The rest of the Republican presidential candidates went off the deep end with him,” the letter says. “We’ve seen clearly that all the leading Republican candidates have sided with the far-right at the expense of the Latino community. They’re capitalizing on negative stereotypes and inaccurate information about our community in order to win votes from the GOP base.”

* As if the Marcobot’s world wasn’t already bad enough, did President Obama just give him a death hug in his interview with Christi Parsons?

…you got something like immigration reform, where we did actually do a — I stayed out of it so that I would not be polarizing. You had Republicans over in the Senate working with Democrats to negotiate something — Dick Durbin was involved with this; a young man named Marco Rubio was deeply involved in it — they get a bipartisan bill, it passed by a bipartisan vote, but then this reaction from the base that had been stirred up kills it. And that’s when we start taking executive action.

* For those of us who remember the Reagan administration’s shenanigans related to the Iranian hostage crisis, this report is plausible and not that surprising.

According to the semi-official Iranian news outlet, Ali Shamkhani, the secretary of Iran’s Supreme National Security Council, made the claims during a speech Thursday at a rally in Yazd, Iran.

“In the course of the talks for exchanging prisoners, the Republican rivals of the current US administration who claim to be humanitarians and advocates of human rights sent a message telling us not to release these people [American prisoners] and continue this process [of talks] until the eve of US presidential elections,” Shamkhani said, according to Tasnim.

* Keith Humphreys took a dive into data on U.S. imprisonment rates and found something very interesting.

After decades of growth, the U.S. imprisonment rate has been declining for the past six years. Hidden within this welcome overall trend is a sizable and surprising racial disparity: African-Americans are benefitting from the national de-incarceration trend but whites are serving time at increasingly higher rates.

* Raymond C. Offenheiser, in an article titled: The Billionaire Class and Extreme Inequality, writes that inequality is fast becoming one of the world’s most pressing challenges.

* There is some big news in the world of science today. And as much as this kind of discovery is amazing, it also blows my mind that 60 years after his death, we are still learning just how right Albert Einstein was about a lot of things.

More than a billion years ago, in a galaxy that sits more than a billion light-years away, two black holes spiraled together and collided. We can’t see this collision, but we know it happened because, as Albert Einstein predicted a century ago, gravitational waves rippled out from it and traveled across the universe to an ultra-sensitive detector here on Earth.

This discovery, announced today by researchers with the Laser Interferometer Gravitational-wave Observatory (LIGO), marks another triumph for Einstein’s general theory of relativity. And more importantly, it marks the beginning of a new era in the study of the universe: the advent of gravitational-wave astronomy. The universe has just become a much more interesting place. 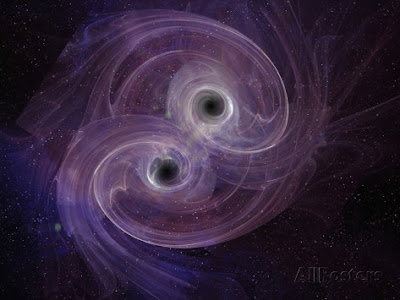