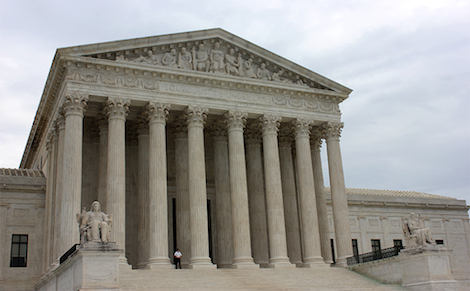 The immediate reaction among Republicans to block any nominee President Obama puts forward to fill the current vacancy on the Supreme Court has a lot of people looking at historical precedents. I appreciated Paul Waldman’s look at the more recent history of Senate votes for current Supreme Court nominees.

Clarence Thomas’ confirmation was a unique case, with credible allegations of sexual harassment. But him aside, what we see is that through the Clinton administration, justices got near-unanimous votes. Then things changed starting with the George W. Bush administration. While Democrats did their best to find some dirt on John Roberts and Samuel Alito and Republicans did the same to Sonia Sotomayor and Elena Kagan, none of it amounted to much of anything. Yet in all those cases, most of the opposition party voted against the nominee.

It’s pretty enlightening to see that in our recent past, Justices as disparate as Scalia and Ginsberg received almost complete consensus votes in the Senate. That indicates that the increasing polarization we’ve seen in more recent cases has more to do with a change in the Senate confirmation process than it does with the ideological leanings of the nominees.

There is no escaping the fact that Democrats have contributed to that polarization. I suspect that the injection of the Supreme Court in Bush v Gore 2000 played a role in that. After all, when the Court rejects all precedent and decides to weigh in on selecting our next president, the stakes go up immensely.

But part of what we are seeing now is that the divide we have been watching develop in our politics is not simply a legislative and presidential issue at this point. The Supreme Court is firmly entrenched in the polarization as well. We can bemoan that reality all we want, but it is a fact. We’ll see it play out in this nomination process in a way that is historically unprecedented. What we will be witnessing is the alteration of one of our three branches of government in much the same way that the ubiquitous use of the filibuster has changed the Senate.

It’s hard to avoid the feeling that we are heading towards a breaking point in this country as the polarization stretches the functioning of our government in every arena. A slow walk-back from that reality doesn’t seem very likely. Could a non-functioning Supreme Court finally be the last straw? I’m not so sure. But we might soon find out.