* According to the polls, Donald Trump is set to be the big winner of the South Carolina Republican primary. Based on the poll aggregate at Real Clear Politics, he maintains a lead of 17.5. The real race seems to be for standing in the rest of the field. Will an endorsement by Gov. Nikki Haley help Rubio? Or is Ted Cruz’s ground game going to make the difference? We’ll see.

* Most of the commentary about Donald Trump lately has centered on the fact that his attacks on George W. Bush haven’t hurt his standing in the polls. But over the last couple of weeks, half the Republican field has dropped out of the primary race while Ben Carson’s numbers tanked. In light of that, it’s interesting to note that Donald Trump’s polling average hasn’t gone anywhere above his usual range in the low-to-mid 30’s. It looks like Rubio has been the main beneficiary of those changes with a slight uptick for Kasich.

* CNN ventured into polling for the Nevada Democratic caucus and finds a virtual tie with Clinton at 48% and Sanders at 47%.

* Meanwhile, Public Policy Polling looked at 12 states that hold primaries between March 1st and March 8th. They found that Clinton leads by double digits in 9 of them, Sanders leads in 2 (Massachusetts and Vermont), while in Oklahoma the race is a virtual tie. The big difference: Clinton’s overwhelming support from African Americans.

* Seth Masket wanted to know whether or not Sanders is developing a voting bloc that resembles the one Obama put together in 2008. To figure that out, he compared Sanders supporters today to those who were supporting Obama at this point 8 years ago. He found some similarities…but one glaring difference. 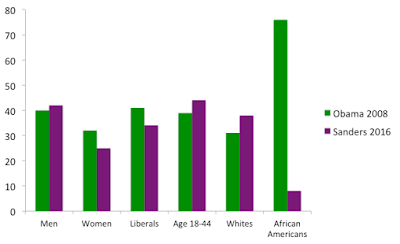 * Finally, editorial boards at newspapers all over the country are starting to weigh in on the Republican plan to obstruct anyone President Obama nominates to the Supreme Court. In a word – they’re not happy about it. Here is a sampling:

Philly.com: Antonin Scalia and the limits of ideology.

Seattle Times: U.S. Senate needs to do its job on Supreme Court nomination.