…the guiding principle of our Cuba policy – our North Star – remains taking steps that will improve the lives of the Cuban people.

That will be the President’s message on his trip – where he’ll have the opportunity to meet with President Castro, and with Cuban civil society and people from different walks of life. Yes, we have a complicated and difficult history. But we need not be defined by it. Indeed, the extraordinary success of the Cuban-American community demonstrates that when we engage Cuba, it is not simply foreign policy – for many Americans, it’s family.

* You may have heard that Trump decided to “go to war” with Pope Francis over his preference for bridges as opposed to walls. But as Emily Crockett explains, the Pope said something considerably more significant today.

During a press conference on Wednesday, Pope Francis suggested it might be permissible for Catholic women to use contraception to avoid pregnancy if they are threatened by the Zika virus.

“Avoiding pregnancy is not an absolute evil,” Francis said. “In certain cases, as in this one, as in that one I mentioned of Blessed Paul VI, it was clear. I would also urge doctors to do their utmost to find vaccines against these mosquitoes that carry this disease.”…

If Pope Francis actually granted an exception for women in Zika-afflicted areas, it would be a huge deal. He has suggested before that the church should focus less on contraception and abortion issues — but he hasn’t actually proposed any policy changes.

* This is one of those stories that I find fascinating. A former Bush Treasury official who is a Goldman Sacs alum and ran for Governor of California as a Republican in 2014 has said that we should break up the “too big to fail” banks. That not only has Wall Street shaking their heads, it means that Sanders and Warren supporters are suddenly cheering on a former Goldman Sacs employee.

* The once-powerful ALEC continues to shrink in size and influence over their climate change denialism. The latest corporation to break ranks…Ford.

Ford has cut ties with the controversial lobby group Alec, joining a roster of big corporations that have distanced themselves from the rightwing network that promotes policies at the state level to counter environmental regulations…

Ford’s departure from the American Legislative Exchange Council puts it in league with other massive corporations that in recent months have concluded that association with the lobbying network is more trouble than it’s worth. Other big firms that have similarly broken connections include the technology companies Google, Facebook, eBay and Yelp, as well as the energy giants Shell and BP.

* Finally, back when I used to work in an office, a poster with this quote hung directly in my line of sight. On many occasions, it is what kept me going. I share it will all of you today in honor of Audre Lorde’s birthday. 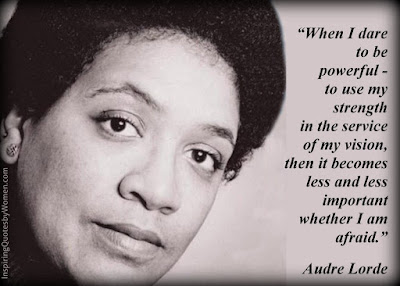