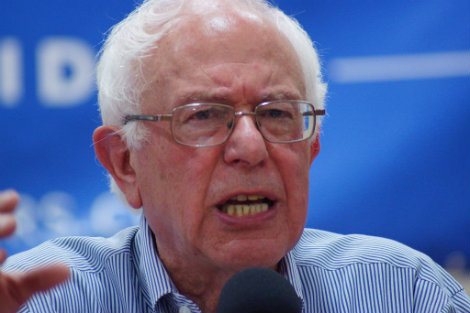 Catherine Rampbell makes a good point about the frustration a lot of progressive wonks have with the Sanders campaign. There’s actually a moral objection to how he’s presenting his proposals that is just plain discomforting. I think her best example involves the unemployment rate and labor force participation. So, do me a favor and think about this:

Consider the claims about labor force participation. If you actually think about Sanders’s proposals — such as completely delinking health insurance from employment, making college free and increasing Social Security benefits — you’ll realize they mostly would reduce workforce participation on the margin.

That doesn’t mean they’re unworthy policy choices. Like any other choices, though, they bring tradeoffs — including making it easier or more attractive for Americans to not have a job.

According to the 53-page report prepared by University of Massachusetts-Amherst economist Gerald Friedman, the cumulative effect of Bernie’s proposals would reduce the unemployment rate to 3.9 percent. To be fair, there are other components to his plan that would boost employment, like massive infrastructure spending. But, it’s also obvious that people who are only working for the health insurance would have the option to quit their jobs, that college students would be less incentivized to work and more incentivized to focus on their studies, and that having the comfort of a more generous Social Security check would make retirement look more feasible. That’s a lot of people who become less likely to seek work. There’s always a debate about what the official unemployment rate means, but if it’s lower because people “have given up looking for work,” that’s ordinarily considered a bad thing. Is that how Sanders arrives at this low unemployment rate?

When you pair pie-in-the-sky numbers like this to Sanders’s totally unrealistic promise to create 5.3% gross domestic product growth, you get the same incredulous response from responsible liberal economists that they gave to George W. Bush’s tax plans, and that they’re currently giving to the economic plans of the Republican candidates for the presidency.

It’s no wonder that liberal economists are frustrated that Sanders’s campaign is practicing, or at least touting, similar statistical shenanigans.

“Making such promises runs against our party’s best traditions of evidence-based policy making and undermines our reputation as the party of responsible arithmetic,” four former top economic advisers to Democratic presidents fumed in an open letter to Sanders and Friedman this week.

One of its signatories, University of Chicago economist Austan Goolsbee, compared the realism of the Sanders agenda to “magic flying puppies with winning Lotto tickets tied to their collars.”

Austan Goolsbee can always be relied upon to explain stuff in a compelling and hilarious way. But this is actually a big problem.

Let me explain why it bothers me. I also get frustrated when Sanders (and Clinton) makes promises that I know he won’t be able to keep even though his numbers do add up. But I’m forgiving about this when the sin in limited to not being on the level about the Republicans’ ability and willingness to block nearly every worthy proposal that can be proposed. It would be a very uninspiring campaign if both Democratic candidates responded to every question with, “Good idea! But we can’t do that because of Paul Ryan and Mitch McConnell.”

For one thing, the Democrats have a realistic hope of winning back control of the Senate (although not with filibuster-proof numbers). And we all assume the House can’t be won, but it wouldn’t violate the laws of physics. There’s some hope that the next president will have a little more leeway to get things done, even if I think it’s a faint hope. For another thing, there’s value in trying to move the Overton Window and change how Americans think about certain issues. We’ll never have free college tuition at state universities if no one makes an argument for it.

So, I’m forgiving of a little rainbow-and-pony talk on the campaign trail. In the limited sense I’ve described above, such happy talk has a legitimate purpose and can actually advance interests that are important to me.

Fuzzy math, though, is a sin. It sends a message that evidence-based policy is optional. And in an era of climate science denialism, that’s not acceptable. Not when the arctic region was absurdly warm in January.

This is where Bernie’s progressive values and aspirations crash for a lot of people. It’s where he stops “speaking for me.”

There are many ways in which his opponent has never resonated for me. Some of them also implicate big moral questions, like when to go to war or depose dictators or impose no-fly zones in Russian proxy nations.

It’s actually disturbingly easy to be morally offended by both Democratic candidates, which is why I’m not on the ramparts for either of them.