* While we’re all focused on what will happen here in November, it is important to remember that the people of Iran will be going to the polls this week.

Iran analysts aren’t convinced Friday’s vote will be all that historic, but they say how well moderate factions do could be a useful barometer of where Iranian politics are headed, at least in the immediate wake of the nuclear deal.

Iranians will be voting for two institutions: the 290-seat Iranian parliament; and the 88-member Assembly of Experts, a group of Islamic scholars and jurists responsible for selecting a successor to the supreme leader, Khamenei, presumably when the 76-year-old dies.

* It is difficult to remain hopeful, but the work towards a resolution in Syria continues.

A new deal between the US and Russia to enforce a ceasefire in Syria has been reached, with the cessation of hostilities set to come into force on 27 February…

Scepticism about whether it can be enforced will be widespread after a previous planned ceasefire failed to take place. Instead, Russia continued its bombing campaign, sieges of starving towns were never lifted and other confidence-building measures ignored…

It is expected that the new ceasefire agreement will include greater details on how it will be monitored and enforced. Its details are due to be finalised in a phone call between presidents Barack Obama and Vladimir Putin.

* A few weeks ago all the talk about the Democratic presidential primary focused on the two candidate’s approach to electability and their theories of change. For Bernie Sanders, the argument on both of those was the same: he would inspire a revolution. With three states having voted now, Steve Benen put together a chart comparing voter turnout in the 2008 primary to what has happened this year. The story it tells is that so far, the revolution isn’t happening. 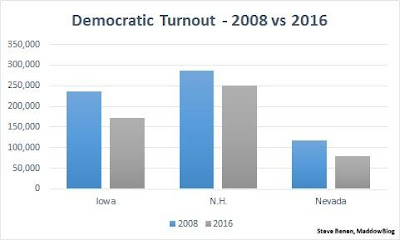 * Conservative groups have a tough message for Sen. Majority Leader McConnell on the Supreme Court nomination.

Conservative leaders are sending a blunt message to Senate Majority Leader Mitch McConnell: The Supreme Court is more important than your majority…

“If you look at some of the conservative movement’s successes, it’s in large part due to the court doing some decent things and making some good decisions,” he added.

Of course, without a Republican president and Senate majority – these folks aren’t likely to get a conservative justice. But why bother with democratic minutiae when taking a stand is so much more dramatic.

* If you are interested in a little schadenfreude on the topic of all the conservative whining we’ve been subjected to recently about political correctness on college campuses, Jesse Singal has a story you’ll enjoy.

* Here’s something to keep your eye on tomorrow:

The Pentagon is poised to submit a plan to Congress for closing the Guantanamo Bay detention facility, a spokesman said Monday.

Navy Capt. Jeff Davis said the administration will meet the Tuesday deadline for submitting a proposal for closing the facility and moving its terrorist detainees…

The plan will call for the closure of the detention facility and lay out several options on how to do so, Davis said…There are 91 detainees remaining at the prison.

* Finally, here’s the video that went viral today. All I’ll say about it is that I agree with FLOTUS, when I grow up – I want to be just like Virginia McLaurin.