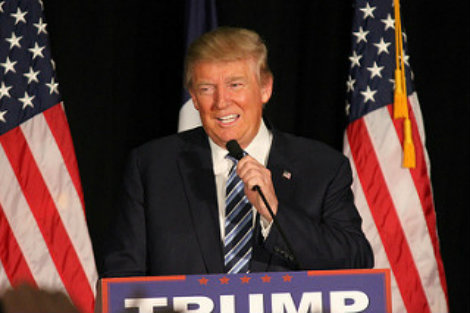 With Donald Trump’s thumping win in Nevada last night, it’s only a matter of time before he wins the Republican nomination. I won’t be surprised if he runs the table and wins every remaining state. It’s just a little too premature to predict this outright, but likely enough that we can begin to look forward. To understand what a Trump nomination would mean, let’s just look at some of the things that Trump has said about important conservatives.

The New York Times put together a helpful list of Trump’s Twitter insults, so I am going to use that as a resource here.

We know that he called Jeb “a sad sack” “low energy individual” and “a total disaster,” in addition to dozens of other insults. And we know that he accused George Dubya of failing to keep us safe on 9/11 and of deliberately misleading us into a disastrous war in Iraq. When Jeb complained about Trump insulting his mother and said she was the strongest person he knows, Trump responded that, if she’s so strong, she should be running instead of her weak son.

It took me seven tweets last night to list all the insults Trump has dished out for Bush family consigliere, Karl Rove. Here’s a truncated list: “a bush plant who called all races wrong”, “wasted $400 million”, “didn’t win one race”, “biased dope”, “moron”, “total fool”, “has made so many mistakes”, “should get a life”, “establishment flunky”, “pushing Republicans down the same old path of defeat”, “still thinks Romney won”, “FoxNews should can him”, “dummy”, “total loser.”

The Republicans’ 2012 nominee hasn’t fared much better. Trump has called Romney “terrible” and “a choke artist.”

No one will forget that Trump mocked John McCain for getting captured by the North Vietnamese, but it’s going to be flat-out awkward that Trump said that McCain is a “dummy” who “graduated last in his class” is “incapable of doing anything” and “should be defeated in the primaries.”

When it comes time to unite the party, he’ll have to contend with having insulted all his opponents:

Kasich: “total dud”
Rubio: “a lightweight choker”
Carson: “Pyramids built for grain storage – don’t people get it?”
Cruz: “the worst liar, crazy or very dishonest”
Fiorina: “if you listen to Carly Fiorina for more than ten minutes straight, you develop a massive headache”
Graham: “dumb mouthpiece”
Walker: “not smart”
Pataki: “terrible governor of NY, one of the worst”
Jindal: “such a waste.”
Paul: “reminds me of a spoiled brat without a properly functioning brain”
Perry: “should be forced to take an IQ test”

And those are just the Twitter insults. Don’t forget some of his other antics, like saying no one would vote for Fiorina’s face and that Ben Carson is a pathological sociopath.

Trump is going to have some problems with Fox News, too. Here’s a sample of what he’s said about their personnel:

Brit Hume: “know nothing”
Megyn Kelly: “I refuse to call Megyn Kelly a bimbo, because that would not be politically correct”
Carl Cameron: “consistently fumbles & misrepresents poll results”
Charles Krauthammer: “should be fired”
Bill Kristol: “a sad case”, “always wrong”
Frank Luntz: “a low-class snob”
George Will: “boring and totally biased”, “should be thrown off Fox News”

What about other organs of the right?

Trump said “very few people read” the “dying” National Review, and their editor in chief, Rich Lowry, is “clueless,” “incompetent,” and “should not be allowed on TV.”

The Club for Growth is “crooked” and filled with “total frauds.”

Brent Bozell of the right-wing Media Research Center is “begging for money like a dog.”

Charles Koch is “looking for a new puppet.”

This really only scratches the surface of how many people and right-wing organizations have been mercilessly mocked and insulted by Donald Trump during his candidacy for the Republican nomination.

I put this together so you can see the whole picture in one place.

So, the question is, can a Republican candidate for the presidency perform well when they’ve alienated this much of their Mighty Right-Wing Wurlitzer?

How willing will Trump’s enemies be to forgive past slights and get in line to help push him into the Oval Office?

There are a lot of people whose income depends on their ability and willingness to shill for the Republican Party. We’ll see how much pride and self-respect they have.