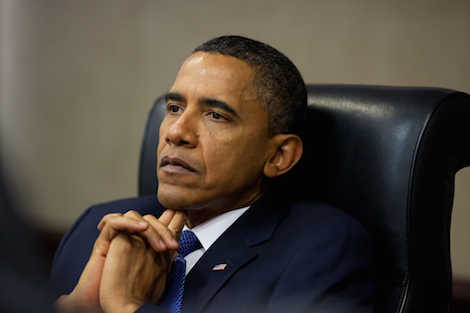 Here is a list of the things I can remember:

That is a list of the way Republicans in Congress have taken unprecedented actions against President Obama. Of course it doesn’t include the unprecedented use of the filibuster by Senate Republicans to block his nominations, appointments and legislative agenda when they were in the minority. Nor does it include all the times that Republican politicians, candidates and officials have questioned his citizenship, love of country, and clearly professed religious beliefs.

As Josh Marshall says about the latest example of refusing to hold hearings on the President’s Supreme Court nominee, it is “a culmination of Republican efforts not simply to block Obama’s policies but to delegitimize, degrade and denigrate his presidency and the man himself.” That was essentially my reaction when I first heard of their plans. The evidence flies in the face of Republicans and pundits who attempt to turn this whole approach on its head and claim that it is the President who is being divisive.

Even for those who deny the inherent racism involved in attempting to delegitimize this country’s first African American president, it is obvious that – while there is nothing illegal in what Republicans are doing – it is dangerous to the very underpinnings of our democracy. When the people have spoken and elected someone to lead this country – but they are thwarted in carrying out their Constitutional duties to do so by attempts from the opposing Party to undermine them – it is not merely an affront to that leader. It is a challenge to all of us who participated in that electoral process. And it eats away at our confidence is doing so going forward. It is also a recipe for chaos.

Our democracy is not based on all of us agreeing with each other. The founders gave us a process for voicing those disagreements and doing the hard work of taking care of the country’s business in the midst of them. These unprecedented actions by the Republicans to undermine and delegitimize one of the three branches of our government place their side of the argument above those processes and thereby pose a threat to its very survival.

It is not up to President Obama to challenge this threat alone. As citizens, we need to recognize what is happening and use our voices to call it out…be that via words or ultimately in the voting booth.