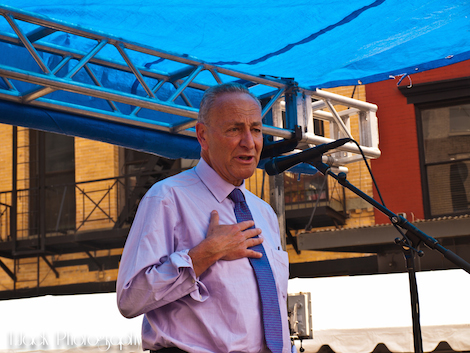 Politicians are finally noticing that we’re experiencing a health disaster that’s been as deadly or deadlier than the AIDS and crack cocaine epidemics of the 1980s. The Senate Judiciary Committee is trying to work through the process of marking up and sending the Comprehensive Addiction and Recovery Act [CARA] to the floor. They’re scheduled to have a bunch of votes today, and unfortunately the whole thing has become politicized.

As the Huffington Post’s Ryan Grim and Jason Cherkis reported last week, Sen. Chuck Schumer is getting involved in a way that’s making supporters of the bill uneasy.

The root of the problem is that the lead author of the bill is vulnerable Republican incumbent Rob Portman of Ohio. While there are official denials all around, some anonymous sources on both sides of the aisle are accusing Schumer of being reluctant to give Portman a political win that he can take to the voters in November. If true, it’s the same kind of nihilism that Mitch McConnell has been pilloried for authoring in response to the election of Barack Obama in 2008.

The dispute, at least on the surface, is about funding levels in the bill. Senator Jeanne Shaheen (D-NH) has an amendment that would authorize $600 million on an emergency basis. The Republicans aren’t willing to spend that kind of money, so Schumer is arguing aggressively that they aren’t serious about the opioid problem.

This might be considered Basic Politics 101, except that the gambit threatens to kill the bill in its entirety. And that’s not something organizers (or even Senate Democrats working on this issue) are interested in seeing. Sen. Sheldon Whitehouse was reportedly upset enough with Schumer’s posturing that he skipped a press conference with him on the funding amendment.

Senate Democrats and drug policy groups pushing for a strong response to the heroin epidemic are growing increasingly concerned that Sen. Chuck Schumer (D-N.Y.) is dangerously politicizing the issue, risking what has been steady, if slow, bipartisan progress…

…The bad news is that some of the states that are in the most desperate need of help also happen to be home to some of the Republican senators Democrats would most like to knock off in 2016. And if the Democrats pick up enough seats, Schumer is poised to become Senate majority leader…

“[M]eaningful progress on the opioid and heroin epidemic is only possible when policymakers commit to moving forward in a bipartisan fashion,” the letter [to the Senate] from the Harm Reduction Coalition reads.

“We have appreciated the bipartisan spirit of collaboration with which Senate Committees have thoughtfully approached these issues, emblematized by the strong support in the Judiciary Committee and amongst the broader community for [CARA]. Harm Reduction Coalition requests that you honor this bipartisanship as you work to advance this bill to the Senate floor,” reads the letter, which was sent this weekend to Senate leaders and provided to The Huffington Post by a Senate source.

Sen. Whitehouse seemed to get with the program later on.

Democrats want to add the money to a smaller bipartisan measure negotiated by Portman, Democrat Sheldon Whitehouse of Rhode Island and others that would authorize grants for prevention and treatment programs. The bill is set for a Senate procedural vote Monday.

“There comes a time when something has taken enough American lives that you have to take it seriously,” Whitehouse said in an interview at the Capitol. “It would be unfortunate if they insisted on passing a bill that addresses this issue without being willing to put a nickel behind it. I think that’s really dishonorable and I hope they won’t do that.”

Honestly, the funding here is of secondary importance for a variety of reasons. First, the most important thing is that Congress come to a consensus that this is one of the biggest problems facing the country and authorize a response. Second, while a problem of this size certainly requires substantial resources, the money being discussed here is insignificant whether it’s appropriated or not. Third, much of the money under discussion isn’t even devoted to tackling the emergency. Research is nice, but what’s needed is tens of thousands of beds for people who are addicted to opioids and require long-term intense treatment. Other monies are devoted to law enforcement, which is also potentially useful but runs counter to overall thrust to get people to treat this as more of a public health fiasco than a criminal one.

To his credit, Schumer has been talking about the opioid epidemic for a while now. I’d hate to see him screw this up because he’s so reluctant to give people any reason to reelect vulnerable Republicans.

Let’s get Congress to agree that something must be done.

Once that’s done, the brutal facts on the ground will eventually lead even the blind to better solutions that are more sensibly targeted and more proportionate to the enormous task at hand.