* After Trump refused to disavow the support of David Duke and/or denounce the KKK, leave it to Mike Huckabee to ask the burning question: “Does anybody think Donald Trump is a racist?” Since I try to follow Jay Smooth’s advice to avoid calling someone “a racist,” and instead, point to their words and actions, this might be a good time to remind people that:

1. Trump led the revival of the whole birther movement – demanding that our first African American president also be the first one who had to produce his birth certificate.

2. Trump was sued by the Department of Justice for racial discrimination in his NY apartment complexes. For example:

When a black woman asked to rent an apartment in a Brooklyn complex managed by Donald Trump’s real estate company, she said she was told that nothing was available. A short time later, a white woman who made the same request was invited to choose between two available apartments.

3. Trump called for the death penalty for the “Central Park 5” before they even went to trial.

* Speaking of The Donald:

Trump said he’ll open up the 9/11 commission papers that are secret so people can know who “really” knocked down WTC https://t.co/9NjIYfTevX

I guess Trump’s idea of “free stuff” is that everyone gets a tin foil hat. https://t.co/RjhbNporH3

As a non-partisan organization, NCAI invited all of the 2016 presidential candidates to present their platforms to tribal leaders but only two accepted the offer: Hillary Clinton and Bernie Sanders, both Democrats.

Watching the fight unfold between President Barack Obama and Senate Republicans over who should choose the next Supreme Court justice, Michael A. Bowden got angry at what he saw at the latest affront to the first black president.

And then his thoughts turned from Washington to his own state.

Obama won’t be on the ballot this fall, but Pennsylvania GOP Sen. Pat Toomey will — and Bowden has made defeating him in November a priority.

* Finally, you probably heard the news that 2015 was the hottest year in historical record. That’s the bad news. But 2015 also set another record – which is good news.

A record $367 billion was invested in renewable energy around the world last year, according to a new report published today by Clean Energy Canada.

That’s more than a third of a trillion dollars (USD) and a 7 percent increase on 2014.

Whereas the oil price crash had everyone expecting renewable energy projects to stumble last year, this latest analysis shows that the sector actually boomed. 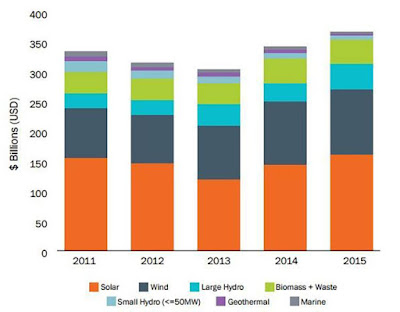