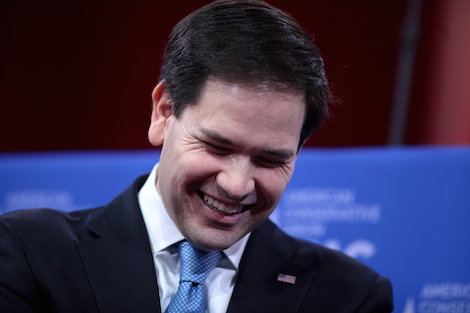 Back when my writing tasks were mostly focused on producing PR for a nonprofit, I remember hearing an old axiom which said that in order to reach the maximum audience, you should target the comprehension level of the typical 8th grader. That’s why I found this information from Dana Milbank to be so interesting.

One language gauge, the Flesch-Kincaid grade-level index, measures sophistication by syllables per word and words per sentence. This is meant for written language, but, applied to campaign speeches and debates, it gives a rough sense of the relative levels of candidates’ rhetoric.

…In speeches after the Nevada caucuses, Cruz and Democratic candidate Bernie Sanders were at a ninth-grade level, Hillary Clinton was at a seventh-grade level. And Trump? Second grade.

Milbank goes on to assess Trump’s performance in the last debate.

Trump rarely left the primary grades the entire debate. On illegal immigration, he was in fifth grade. His views on Mitt Romney and on polling of Hispanics: fourth grade. His record as an employer? Third grade. Through it all, his vocabulary would have suited Dr. Seuss: “They will go out. They will come back. Some will come back…The wall just got 10 feet taller…We’re going to make many cuts…We’re going to get rid of so many different things.”

And he ended where he began — in third grade. “I will get it done,” he said. “Politicians will never, ever get it done. And we will make America great again. Thank you.”

But never fear…Marco Rubio is finding a way to lurch into the gutter to join Trump. Of course, his efforts look more like a 3rd grade school yard bully contest. Not only did he suggest that perhaps Trump wet his pants on the debate stage, recently he said this about his opponent:

In response to the property mogul calling him “little Rubio,” Rubio conceded that Trump was taller than him. However, the Florida senator suggested Trump had small hands for his height.

“And you know what they say about guys with small hands,” Rubio said with a smile, prompting stunned laughter from the crowd.

After a brief pause he added: “You can’t trust ’em!”

Apparently this is not a matter of the Florida senator being ground down by a bruising primary. It is an actual strategy.

Senator Marco Rubio, seeing his path to the Republican nomination grow narrower with each contest, has determined that the only way to beat Donald J. Trump is to fight like him: rough, dirty and mean.

The acidity coming from Mr. Rubio these days, and the gleefully savage way Mr. Trump has responded, have sent an already surreal presidential campaign lurching into the gutter with taunts over perspiration, urination and self-tanner…

“We came to the conclusion that if being a part of the circus is the price you have to pay in order for us to ultimately be able to talk about substantive policy, then that’s what we’re going to do,” said Todd Harris, a senior Rubio adviser.

That, my friends, is the state of play in the Republican Party right now. I don’t see how anyone can come to a conclusion other than that it is time for their Mamas to tell them to go to their rooms until they can act more appropriately.