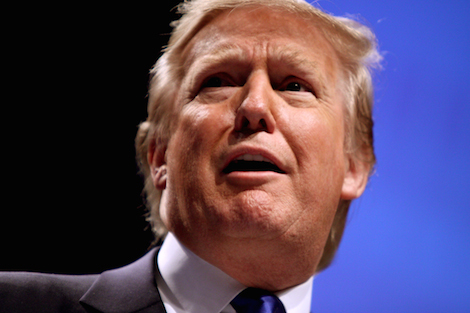 For the last few days, my head has wanted to play with the idea of what a general election match-up between Hillary Clinton and Donald Trump would look like. To be honest, I’ve tried to fend off those thoughts because – if we’ve learned anything from this primary season so far – it is that forecasting the future of this race is a fools errand. For example, take a look at how David Plouffe handicapped Trump’s chances in the general:

He could lose in a landslide or win narrowly. Most volatility since 1980. https://t.co/UJYxD8Klsx

But today I’m reading about Democrats starting to prepare to face Trump in November. Stan Greenberg’s Democracy Corps released some interesting data about Republican voters. In addition, Amy Chozick and Patrick Healy talked to people in the Clinton camp about how they are preparing to face The Donald.

After all that, I can’t stop myself. With full caveats about how things might change, I have a few thoughts to share about a Clinton/Trump contest.

First of all, unlike Greg Sargent, I never doubted that Democrats would take Trump seriously. Given the Party’s propensity to “Oh, my!!” at the slightest challenge, I’d be much more concerned about the possibility of cowering at his supposed strength.

What has been tripping my synapses lately is the reality that the whole conversation changes (mostly for Republicans) once it turns away from appealing to base voters and heads towards the general populace. Republicans have avoided going after Trump too hard for fear of offending his supporters. The Clinton campaign won’t share that concern.

While Mrs. Clinton radiates positive energy on the trail, Democratic groups are beginning to coalesce around a strategy to deliver sustained and brutal attacks on Mr. Trump.

The plan has three major thrusts: Portray Mr. Trump as a heartless businessman who has worked against the interests of the working-class voters he now appeals to; broadcast the degrading comments he has made against women in order to sway suburban women, who have been reluctant to support Mrs. Clinton; and highlight his brash, explosive temper to show he is unsuited to be commander in chief.

On the debate stage, Trump won’t be surrounded by weak candidates trying to show that they can out-bully him with moderators like Hugh Hewitt and the cast at Fox News. He might actually be pressed to answer questions about things like how he would deal with Vladimir Putin or how he would round up 11 million undocumented people or what he would do about climate change. Imagine that!

Chozick and Healy focus on the fact that Clinton and Trump are polar opposites when it comes to approach.

Mr. Trump and Mrs. Clinton are polar opposite politicians, and Mr. Trump’s direct and visceral style could prove difficult for Mrs. Clinton, whose inclination is detailed policy talk and 12-point plans.

That kind of thing might have been worrying before we all saw how Clinton handled the Republican members at the Benghazi Hearing a few months ago. For eleven hours she maintained her composure while they threw their rants and raves at her. In the end, they were the ones who looked foolish. I can imagine something similar in a general election debate.

Finally, I am looking forward to the day that President Obama is able to weigh in on the campaign trail for the Democratic nominee. Over the years he has shown several characteristics that Clinton could employ. For example, the President has been a master at giving the opposition enough rope to hang themselves. One needs only recall the moment when he simply said, “Please proceed, Governor” to Mitt Romney during a debate. He is also the person who – to this day – has done the best job of using humor against Donald Trump. Remember this?

There are a lot of ways to take a potential Donald Trump nomination seriously. That does not preclude demonstrating to voters that he is a fool.