I just took a little Google screenshot to illustrate a point. Check out the times: February 26th and 9 hours ago.

That’s all the time that separates Lindsey Graham joking at the Washington press club foundation dinner on Thursday night that “If you kill Ted Cruz on the floor of the Senate, and the trial was in the Senate, nobody could convict you,” and declaring on CBS last night that “we may be in a position where we have to rally around Ted Cruz as the only way to stop Donald Trump.”

I doubt this juxtaposition can be improved upon as an object lesson on the agony Republicans are experiencing.

But let’s see what we can do.

“I don’t remember anything like this in my lifetime of effectively 30 years in Republican Party politics,” said Bruce Haynes, a GOP operative in Washington. “People don’t know what to do. They call me in tears and say, ‘I can’t vote for him because he’s a liar, a cheat and a racist and yet everything I’ve ever cared for in politics is on the line and could be lost if I don’t vote for him.’”

Sitting on a sofa on a Sunday afternoon
Going to the candidates debate
Laugh about it, shout about when you got to choose
Every way you look at it, you lose
Where have you gone John Boehner?
A nation turns its lonely eyes to you

No one cares what a lowly House backbencher thinks, particular one who is retiring in disgust, but let’s see what Scott Rigell says anyway:

Hours before the polls closed, he released an open letter on a Virginia conservative blog promising not to vote for Trump but not endorsing any other candidate.

“My love for our country eclipses my loyalty to our party,” said Rigell, “and to live with a clear conscience I will not support a nominee so lacking in the judgment, temperament and character needed to be our nation’s commander-in-chief.”

His Virginia district voted for Donald Drumpf in large numbers.

In another sign of the health of the party, the chairwoman of the Republican Governors Association, New Mexico Gov. Susana Martinez, would not commit to supporting Trump if he is the nominee. On the other hand, as recently as December, Gov. Martinez was reportedly drunk and fending off police who wanted to enter her hotel room to get her guests to stop throwing bottles off the balcony. So, you know, maybe no one actually wants her support.

What Trump did have last night was the support of a former head of the Republican Governors Association, the slowly deflating and visibly addled Chris Christie of New Jersey. 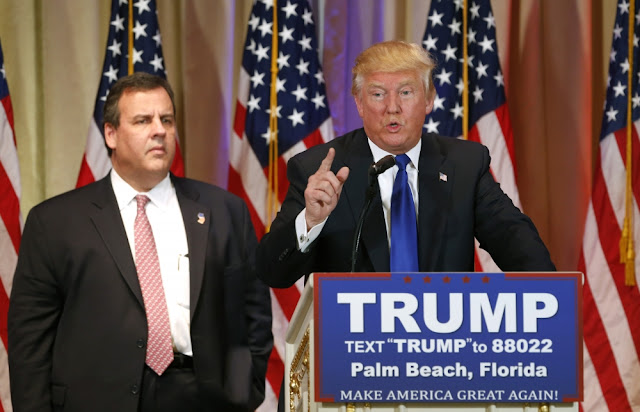 Of course, Christie had good reason to be in Palm Beach dining with The Donald at Marjorie Merriweather Post’s terrific Mar-a-Lago estate. He’s not welcome back home.

Six New Jersey newspapers say Gov. Chris Christie should resign over his endorsement of Donald Trump. They add that if Christie refuses to quit, New Jersey citizens should initiate a recall effort.

The papers on Wednesday ran brutal editorials saying they are fed up with everything from Christie’s famous sarcasm to “his long neglect of the state to pursue his own selfish agenda.” They add that they are “disgusted with his endorsement of Donald Trump after he spent months on the campaign trail trashing him.”

The New Hampshire Union Leader, which endorsed Chris Christie before Christie endorsed a guy who’s not sure the Klan is all bad, says that the New Jersey governor told them that he would never endorse Herr Trump. They’re not impressed.

Watching Christie kiss the Donald’s ring this weekend — and make excuses for the man Christie himself had said was unfit for the presidency — demonstrated how wrong we were. Rather than standing up to the bully, Christie bent his knee. In doing so, he rejected the very principles of his campaign that attracted our support.

Or, as Jennifer Rubin put it, “[Christie] has gone from someone admired for his political talent to the object of derision as an errand boy for someone who espouses fascistic ideas…”

Yes, pretty much. But it’s hard to indict a man when that man is the Attorney General of the United States. And, really, you can get the FBI and the prosecutors to back off while you’re an active candidate for the presidency, but since he’s dropped out he’s like a 1960’s kid who just graduated and lost his college deferment. Christie’s probably angling for any hope to avoid the hoosegow. “I don’t want to be your running mate, Mr. Trump, just put me in charge of the Department of Justice so I can go all Robert Bork on some muthaf*ckers.”

Politico’s Mike Allen believes it’s a bit loopy to think the Republicans can solve their KKK problem by denying Trump the nomination at the Cleveland convention:

The GOP establishment is now ONE for 15 in this cycle (and the one is liberal Minnesota, Marco Rubio’s sole win). After his Super Tuesday romp, Trump has a 90%-plus chance of winning the nomination. He has more delegates than Cruz and Rubio COMBINED, 10 wins, and big leads in upcoming states. Talk of a brokered convention seems nuts: Imagine the blowback from Trump and his followers if they were denied by a bunch of stuffy rich white dudes behind closed doors.

Obviously, Mike Allen missed the part about where there’s blowback if your candidate needs time to research whether he should disavow the support of the former Grand Wizard of the Louisiana Knights of the Ku Klux Klan.

Cruz and Rubio camps are no longer pretending they can win this nomination before Cleveland. Both camps pushing convention scenarios.

…to the convention they’ll go.

Where things should get quite fun…

“I cannot support Donald Trump,” Nebraska Sen. Ben Sasse wrote in a long Facebook post Saturday night. “If Donald Trump ends up as the GOP nominee, conservatives will need to find a third option.” At least four House members have followed suit, stating publicly they will not support Trump no matter what.

While American history is replete with presidential nominees who’ve been less than welcomed by their party’s power brokers, never in recent memory have so many prominent politicians vowed not to support a candidate who’s increasingly a lock to top their ticket.

“There is someone now leading the pack who could destroy the party and lose an election that should be ours,” said former Minnesota Sen. Norm Coleman.

And now it is time to cue the Don McLean:

And the kids don’t want to see his act?