Pretty much any story about AltSchools, the new private micro-schools popping up around the country, raises concerns about hype and overcoverage.

There’s also a long and unfortunate history of education coverage focusing on novelty items rather than core issues, creating the impression that innovation rather than structural changes, can improve education at scale. (I should know, I’ve done it several times myself.)

And so, the Rebecca Mead story in the latest New Yorker (Learn Different) brings up immediate red flags — notwithstanding issues that have come up with her previous forays into writing about education. How could this piece add anything new or valuable?

But then, lo and behold, the piece turns out to be remarkably solid, even admirable. Mead’s piece displays a healthy mix of curiosity and skepticism about the model, which its founders tout as a possible way to transform public education for all students. The piece gets at the gap between the model’s ambitions and the current reality of what can be done using personalized learning. And it catches us up with some of the pesky logistical obstacles and human foibles that can get in the way of the best-laid vision.

First and foremost, the lengthy piece is disarmingly well-written, full of stylistic flourishes that help the reader visualize what is going on. Some of the scenes (involving castles, princesses, and tortrure chambers) are strange and funny. Other favorite lines include:

“On the building’s exterior is a logo: a light-blue square, with rounded corners, bearing the word “alt.” It looks like an iPhone app awaiting the tap of a colossal finger.”

“The dÃ©cor evokes an IKEA showroom: low-slung couches, beanbags, clusters of tables, and wooden chairs in progressively smaller sizes, like those belonging to Goldilocks’s three bears.”

“”Two out of five!” he shouted at one point, as oblivious of those around him as a subway rider wearing earbuds and singing along to Drake.”

“He shook the unresponsive tablet, then stabbed repeatedly at the screen, like an exhausted passenger in a cab after an overnight flight, unable to quell the Taxi TV.”

“They had failed fast and failed forward. That was what they were supposed to do. Tomorrow, they would iterate.”

This is classic New Yorker writing. Well-observed. Somewhat snide. Vivid and imaginative descriptions like these are often missing in education stories, pushed out by figures, dates, and quotes. But they can be remarkably useful if done well.

The piece also hones in on the reality that not all students will pick challenging projects when given a choice of what to do in school: “Four boys were seated on the floor making primitive catapults with Jenga blocks. Half a dozen girls had chosen “art creation,” and were sitting around a table affixing stickers to paper and chatting.”

There’s a reference to Dickens, bringing up the question of whether the AltSchool model is really as Utopian as it may seem on the surface.

Student data privacy also comes up, which is appropriate given the fish eye lens cameras that videotape everything students and teachers do. And some good reality-checking: “Studies of the effectiveness of online learning programs suggest that greater humility is in order. “ 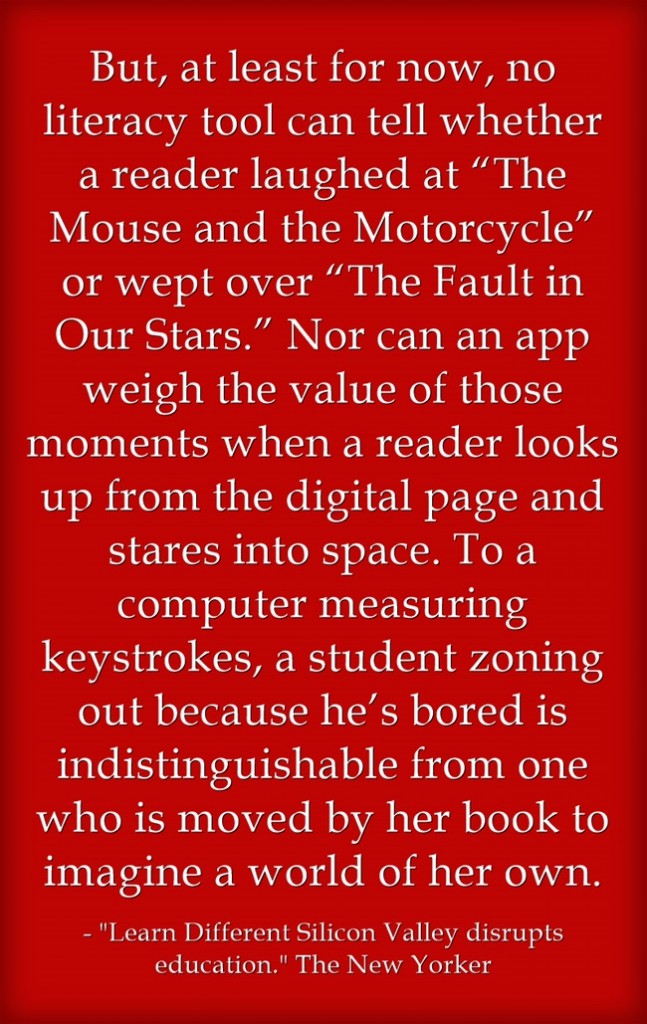 Mead gives some updates on the realities that have confronted the network in its first few months. For example, it sounds like the teachers aren’t finding all the tech and software as easy to use as they’d like — especially uploading student work and matching it with learning standards And it’s not clear that they’ve figured out what to do with the boatloads of video footage they’re compiling, or even the bookmarked moments that stand out.

There are helpful references to other related efforts that have sprouted up round the country, including Summit, Joel Rosen’s Teach To One and Amplify, and quotes from learning experts like Dan Willingham and edtech gurus like Jennifer Carolan (“With all of the investment hype and entrepreneurial frenzy, I worry that some might view personalization as yet another silver bullet for education.”).

To be sure, there are some issues to be found with the piece:

The description of the Common Core — “the government standards that establish topics which students should master by the end of each grade” — raises some questions even though it doesn’t attribute the standards to the Obama administration. The description of the $100 million Zuckerberg grant to Newark as having been “mostly wasted” belies a much more nuanced reality — and illustrates the dangers of journalists building on each other’s work (in this case Dale Russakoff’s book). For some, any attention to edtech is too much. For others, the subtext and semi-snide remarks Mead makes about the effort will be alienating.

But these are relatively minor concerns. Over all, it’s a strong piece, well-written and carefully balanced. Kudos to all involved.