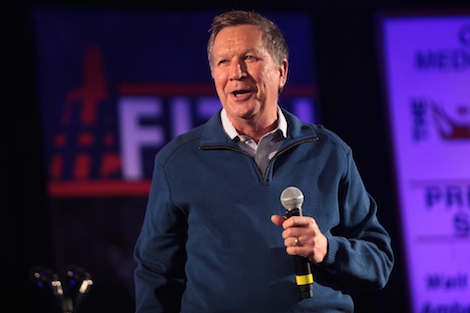 We’re already seeing people try to report on what a contested convention in Cleveland would look like. It’s a tricky task. Getting it close to right involves understanding several different pieces.

Greg Sargent is dealing with two of them. First, there’s an effort to figure out the advance game. What’s the most effective way to keep Donald Trump from winning an outright majority of the delegates. Without this, there will be no contested convention to talk about. Is it better to stop Trump by having three opponents splitting delegates, or two, or maybe a head-to-head matchup would work best?

The second piece is to look at how different delegate splits would play or look at the convention. Obviously, it would be less painful and divisive to deny Trump the nomination if he isn’t even close to having a majority, or if the second place finisher is only a couple of dozen delegates behind him. If he’s got a large plurality lead, Trump and his supporters will have a strong moral argument, supposedly, that he’s the only fair choice of the electorate. But the three-way split strategy to stop Trump will make it more likely that Trump has a significant lead over all of his opponents.

This is useful stuff to think about, but there’s a lot more to consider.

The most important thing to understand is how the mechanics of the convention would work. Which candidates will be eligible for consideration, and when in the process will they become eligible? Which individuals, groups, committees, will have the power to interpret or change the rules? Which rules may need to be interpreted or changed in which scenarios? Who is positioned already to control this process and what candidate do they support, if any? Which candidate will do the best job prior to the convention of influencing who the delegates will actually be so that they can bank their support on a second ballot? How will the anti-Trump candidates coordinate, assuming they can act collectively at all?

For anyone seeking to educate the public about what to expect, that’s a daunting amount of information to wrestle with before you can offer a really informed opinion.

And there’s another problem.

We haven’t seen a truly contested election in a long time. There have been test votes to change the rules, but those have failed. No one can remember a situation where actual multiple-ballot wheeling and dealing took place. And, back when those kinds of deals actually occurred, the candidates were more clearly representative of factions than they are today.

It’s true that Cruz is a Southerner, but so is Rubio, and neither of them really represent a regional faction because there are no regional issues like Jim Crow or slavery at stake. None of the candidates clearly represents the Eastern financial establishment. Trump comes closest by biography, but he also has the most dedicated opposition from that quarter. Cruz is loathed by the Washington Establishment, but he’s the candidate with a spouse who works for Goldman Sachs. Rubio has been the golden boy of the financial elites since Bush and Christie and Walker dropped out, but not for any clear reason beyond his reasonableness on immigration. And Kasich probably comes closest to a Rockefeller or Eisenhower Republican. He did, after all, work for Lehman Brothers.

This is a lot different from a having one candidate from the labor faction, and another from the farmer faction, and another that’s anti-lynching, and another that’s for “segregation now, segregation tomorrow, segregation forever!” We can’t look at any urban political boss or Daley machine. There’s no George Meany champion. There’s not even an obvious conservative/moderate split, at least not in any straightforward way. It’s actually Trump who has the closest thing to an army of dedicated soldiers, but they’re united around something nebulous and visceral rather than any kind of issue that can be horse-traded away.

A short way of putting this is that the delegates won’t form blocks of voters with distinct interests. You can’t tell the teachers that you’ll give them some legislation if they abandon Trump. There will be no rump of delegates who can be bought off by making their guy the head of the EPA or the Energy Department. Can you imagine Donald Trump as a cabinet official or vice-presidential candidate anyway?

What I think this all means is that perceived electability will be the biggest consideration. That’s what John Kasich is banking on, and he’d probably have the poll numbers to back up his case for himself.

But Kasich would have to jump through more hoops than just having the best argument that he can win the general election. He’ll almost definitely need to have Rule 40(b) changed so that he can stand for the nomination despite not having won the majority of the delegates in eight states. And he’ll have to get Cruz and Rubio to back him, which will require that he agree, most likely, to put one of them on the ticket and the other in a position of considerable power.

An outsider like Mitt Romney would face the same challenges and would probably have to wait for multiple ballots to demonstrate that none of the top four can form a majority.

Trump, on the other hand, would have a comparatively easy task. He might be controversial and seemingly unelectable, but nominating him would honor the choice of a plurality of the Republican electorate and short circuit a circus at the convention. It would require no heavy-handed rules changes or the forming of unlikely coalitions. And, perhaps most importantly, it wouldn’t create a situation where Trump might cry foul, walk away from the nominee, and do his best to assure the election of Hillary Clinton or Bernie Sanders.

For these reasons, I see a successful challenge to Trump as unlikely to succeed at the convention, assuming he enters with the most delegates. But it would, at least, put a lot of Republicans on the record that they weren’t willing to swallow his racism and xenophobia and misogyny and boorishness.

That might be the best anyone can hope for.

Probably, the only thing that can stop Trump is Trump. If he makes himself toxic enough, the delegates in Cleveland will find a way to send him packing. What they won’t be able to do is send him packing and keep him on the team.