UPDATE Lots of Twitter response to this. No, I’m not accusing Sanders of “grifting.” His goal is influence, not money. I’m just asking him to level with his followers.

Many Sanders supporters continue to believe that their candidate has a serious chance at the nomination. That belief does not appear to have a sound basis. 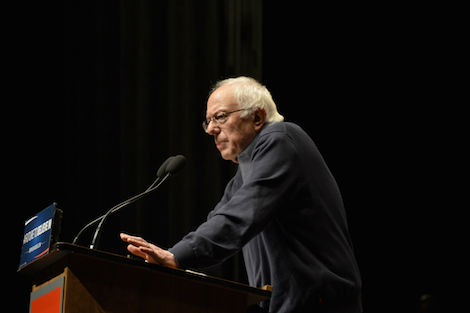 The oddsmakers have him at 12:1 (somewhat worse than drawing to an inside straight). FiveThirtyEight.comÂ has a demographics-based model that specifies how well each candidate would have to do in each state to be on track for a majority of the ordinary delegates (ignoring Clinton’s big edge in super-delegates). So far, of the 13 contests run, Sanders has over-performed in three (Vermont, Colorado, and Oklahoma), hit his target in New Hampshire, and under-performed in the other 11, including Minnesota (which he carried, but by less than he would have needed to in order to stay on track). Overall, he’s at 83% of his delegate target so far, with Clinton at 116% of hers.

In the primaries just ahead, FiveThirtyEight predicts that Clinton will run 25 points ahead of Sanders in in Michigan, and by just about the same margin in Florida and Illinois.Â In Ohio and North Carolina, she’s projected to win by only 13-15 points. (Those are the “polls-only” forecasts. The 538 “polls-plus” extends her leads in each case.)

Yet Politico reports that Sanders’s expected wins in Kansas, Maine, and Nebraska this weekend (three very white states where he’s spent a ton of money) are supposed to “provide a burst of momentum” for his campaign, despite his expected thrashing in Louisiana. Since LA has about three-quarters of the population of the other three combined, delegate pick-ups for the weekend are likely to be more or less even.

So what are the Sanders people up to? Someone I knowÂ who talks to people inside the Sanders campaign is hearing that realists there do not see a plausible path to his nomination. He is committed to staying in the race for the purpose of maximizing leverage by building a large group of delegates, with 1000 being used as a rough target.

For some Sanders supporters, that would be a good enough reason to carry on.Â Â But others still sincerely think he can be nominated, and that either (1) he would be a better president than HRC or (2) he has a better chance than HRC to beat Trump or whoever. It’s not at all clear that those folks would keep working and giving for the purpose of building a movement or influencing the platform. And some of them, if they knew that Clinton had a virtual lock on the nomination and that the Sanders campaign understood that, would probably decide that their effort was better given to the task of winning in November. It’s hard to tell a story where Sanders’s continued hammering away at Clinton as a tool of Wall Street makes us safer from Donald Trump or Ted Cruz.

It seems to me that second group is, in effect, being cheated out of time and money. I bitterly recall writing what for me at the time was a substantial check to the McGovern campaign in the fall of 1972, in response to a desperate-sounding direct mail appeal and inspired by the idea that I was helping to defeat Richard Nixon. Only later did I learn that McGovern’s advisers, having given up on the Presidency by October, decided to cut back on expenditures to run a surplus, which was then diverted – perfectly legally – to McGovern’s Senate re-election campaign two years later. Â I felt – still feel – that I’d been flim-flammed.

Now, there’s no reason to think that the Sanders campaign is contemplating a similar gimmick. But the principle seems to me the same: the managers of the campaign getting people to give, and to work, in the false belief that they’re helping to elect a President. Not OK.

FootnoteÂ Surely this is not a secret from the reporters covering the Sanders campaign. But I’ve seen no hint of it in print. Of course as long as the campaign continues, the people writing about it have stories to write, and of course any one of them who reported what was said to me would get the cold shoulder from Sanders and his staff. Still, isn’t it the job of journalists to tell their readers what they know?