Putin said Russia would keep open both Russian air force and naval bases in Syria, but he said the task of the Russian intervention has been achieved and that diplomacy should now take over. A shaky cease-fire has quelled fighting in Syria, although it has not fully stopped.

* At a DNC meeting in Austin, TX on Friday afternoon, President Obama offered his thoughts on the rise of Donald Trump in this Republican presidential primary.

What is happening in this primary is just a distillation of what’s been happening inside their party for more than a decade. I mean, the reason that many of their voters are responding is because this is what’s been fed through the messages they’ve been sending for a long time — that you just make flat assertions that don’t comport with the facts. That you just deny the evidence of science. That compromise is a betrayal. That the other side isn’t simply wrong, or we just disagree, we want to take a different approach, but the other side is destroying the country, or treasonous. I mean, that’s — look it up. That’s what they’ve been saying.

So they can’t be surprised when somebody suddenly looks and says, you know what, I can do that even better. I can make stuff up better than that. I can be more outrageous than that. I can insult people even better than that. I can be even more uncivil. I mean, conservative outlets have been feeding their base constantly the notion that everything is a disaster, that everybody else is to blame, that Obamacare is destroying the country. And it doesn’t matter whether it’s true or not. It’s not, we disagree with this program, we think we can do it better — it’s, oh, this is a crisis!

So if you don’t care about the facts, or the evidence, or civility, in general in making your arguments, you will end up with candidates who will say just about anything and do just about anything. And when your answer to every proposal that I make, or Democrats make is no, it means that you’ve got to become more and more unreasonable because that’s the only way you can say no to some pretty reasonable stuff. And then you shouldn’t be surprised when your party ultimately has no ideas to offer at all.

* Sixty-three percent of Americans are represented by a climate change denier in Congress.

According to a new report by the Center for American Progress Action Fund, 59% of the House Republican caucus and 70% of Senate Republicans refuse to accept the reality of climate change. This means there are a total of 182 climate change deniers in the House and Senate who collectively represent more than 200 million American citizens (based on their district/state size that they represent in Congress.)

* A couple of months ago Ruby Cramer gave us a look at Hillary Clinton that we don’t see very often – the one that wants to talk about “love and kindness.” In that piece, Cramer referred to Clinton’s remarks at her 1969 student commencement speech at Wellesley College as an example of her focus on that topic. You can read that whole speech online here.

The first African American president and the first black principal dancer at the American Ballet Theater have much more in common than their success. Both have risen to the pinnacle of institutions that have historically been led by whites. Both were raised by determined single mothers and born into multi-racial families. And both seek to use their unique positions of power to inspire a generation of kids who may not see a clear path forward toward success. 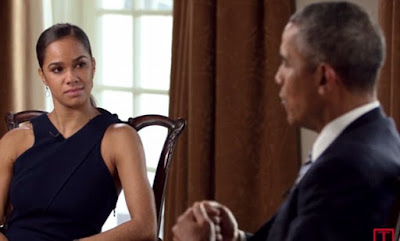